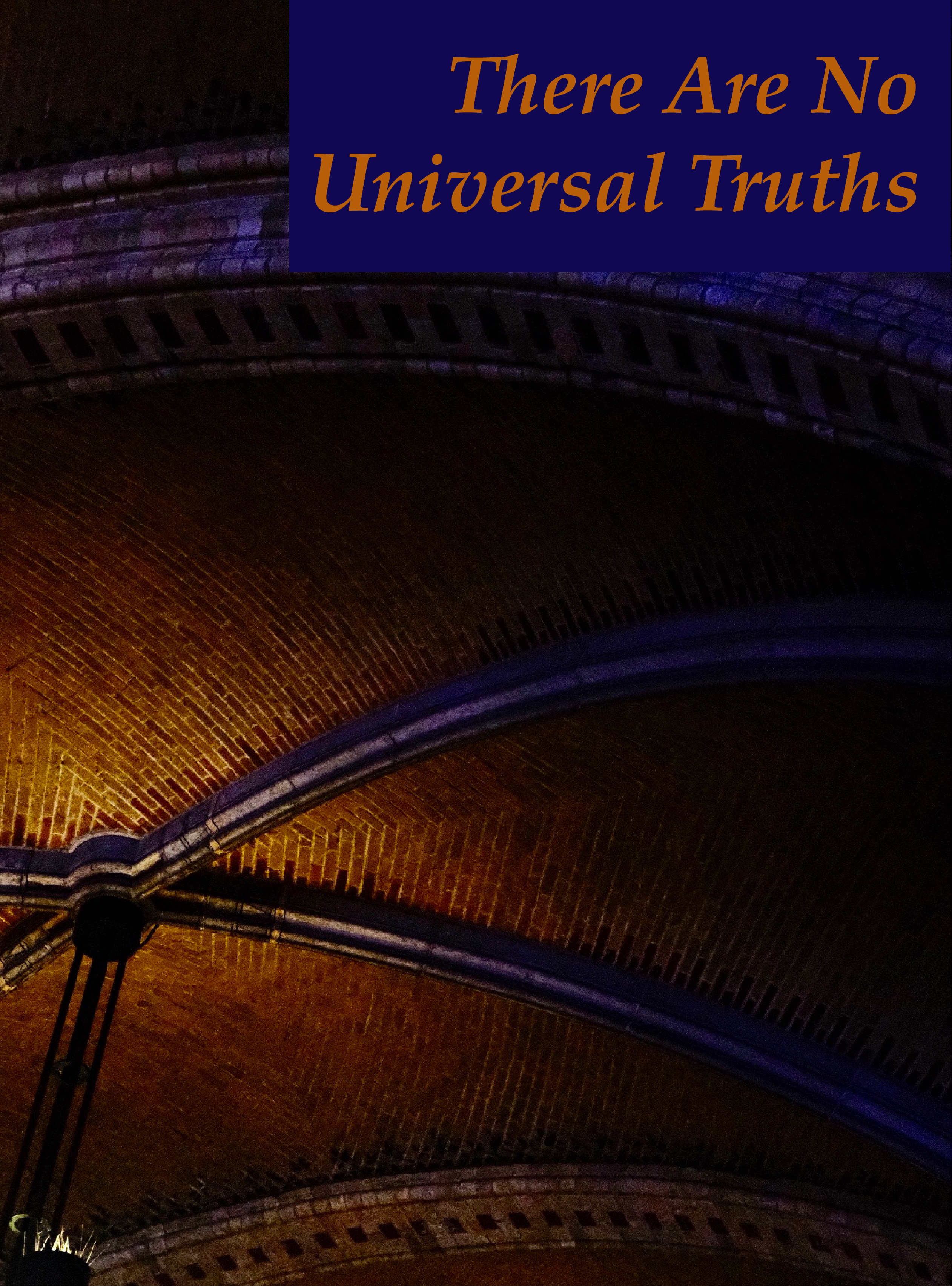 14 Nov There Are No Universal Truths

STANDING ON THE BEACH WITH MY FEET IN THE SAND, I can feel the water rush from the sea and swallow my feet. I can feel the cold surge through my legs into my core; I can see the waves form and crash. I taste the lingering salt in the air.

My senses tell me, what’s taking place is real.

We trust our senses without much thought — if the stove is hot, we pull away our hand; if the wind blows cold, we drape a jacket on our shoulders.

Yet, we must deliberately decide whether or not to digest the other information instilled in us throughout the day, as we determine what separates truth from reality.

A harmful thought may be construed as truth, just like what we see on TV or hear somebody say. It’s our job as individuals to turn around, and seek our own truth.

Around 2400 years ago, the Greek philosopher Plato wrote his influential piece, The Republic. One chapter focuses on the Parable of the Cave, one of the most well-known stories in philosophy.

In this story, prisoners are stuck in a cave and forced to face one of the walls. On the wall are shadow images, cast by objects behind the prisoners.

A fire burns behind them and provides the light that causes the images to appear as shadows. The prisoners have never known anything besides these images; the shadows are their truth.

“To them, the truth would be literally nothing but the shadows of the images.”

That is until one of the prisoners is liberated. He stands up in difficulty; he turns around and leaves the cave realizing that an artificial fire has been causing these shadows to appear all along.

The prisoner reaches the world above and sees trees, the moon, animals, and the sun itself, which is painful to observe at first. Plato writes:

“He will suffer sharp pains; the glare will distress him, and he will be unable to see the realities of which in his former state, he had seen the shadows.”

This idea of turning around doesn’t mean shunning society, nor does it mean living in denial, pretending like reality doesn’t exist.

It’s essential to be open-minded and listen to what others have to say; however, what’s just as important is the will to question why things are the way they are.

Plato is known for writing dialogues. The entire book is essentially a back and forth between Socrates, whom Plato uses as his driving character, and other Athenian citizens.

“If they [the other prisoners] were in the habit of conferring honors among themselves on those who were quickest to observe the passing shadows, do you think that he [the liberated prisoner] would care for such honors and glories, or envy the possessors of them?” Plato writes.

It doesn’t matter what accomplishments one achieves in the cave; now, the liberated prisoner is running his own race.

“Would he not say with Homer, ‘Better to be the poor servant of a poor master,’ and to endure anything, rather than think as they do and live after their manner?”

“Yes, I think that he would rather suffer anything than entertain these false notions and live in this miserable manner.”

Plato argues that turning around is to think for oneself. Perhaps the liberated prisoner would go out into the real world and search for what provides value to his heart. There’s a chance that he could fail.

Yet, taking a chance, trusting his own truth, and perhaps failing is a greater step of courage than running the same race as those in the cave, who never saw the light of day.

Every era of history has its own supposed truths.

We’re taught in school what’s true and what’s false. From a young age, we’re told to listen to our parents as they did theirs, go to college so we can get a job, and become a contributing member of society.

We become ingrained into the system, believing a steady job, a relationship, a house, and more material things will make us happy. But what if they don’t?

Do we ask why we feel the way we do? Or do we carry on, living that lie?

We’re never going to have a clear answer to what we should be doing with our lives. But when we feel pain, uncertainty, and discontent, we must ask ourselves if we’re living a truth that’s not our own.

When we listen to our hearts and let what others think roll off our back, the world doesn’t have to make sense. We can still be happy, content, and at peace through the uncertainty.

There will always be questions.

But at least then, we’ll know we’re thinking for ourselves and living our truth.

I think this is Plato’s most essential lesson — to question traditional conceptions of reality, success, and happiness by asking questions of society and the universe.

We must dig deep and ask what we believe, what we love, what we want out of life.

Everybody will have an opinion on what we should be doing, even our friends and families. But nobody can tell us who we are and what we love about the world.

I believe there’s a misconception with philosophy, that it’s an ancient practice that doesn’t apply to our contemporary lives. Before I started studying philosophy on my own, I thought this way, thinking it was a college class I’d rather avoid.

I’ve now begun to realize that philosophy is just as essential now as it was in Plato’s day. Philosophy is a reminder that others have come before us for thousands of years and have contemplated the same questions.

When Plato wrote The Republic in 380 BC, he didn’t have access to Twitter (imagine if he did) nor a constant barrage of media telling him how the world should work.

Still, there were conflicting factions striving to take Athens, and he had to decide what to believe and what not to believe.

He had his thoughts, he had his observations, and he had other people to discuss with. His essential aim was to uncover what it means to be a part of this world, yet think for oneself.

There’s no doubt that images surround our everyday lives. They’re on TV, in magazines, in movies, and they can be challenging to escape. But the question Plato inspires me to ask is: who’re the ones casting these images?

Where are we getting our information, our truth, our image-casting fire? There are no universal truths.

It may take a turning around from what we know to see this, but like it was for the prisoner, it will get easier once we begin living our truth and believing in it.

The only truth is what we feel in our hearts, beating in our chest. It’s what’s speaks to us in the middle of the night without the pressures of the day, or when we’re on the edge of the sea, absolutely free.