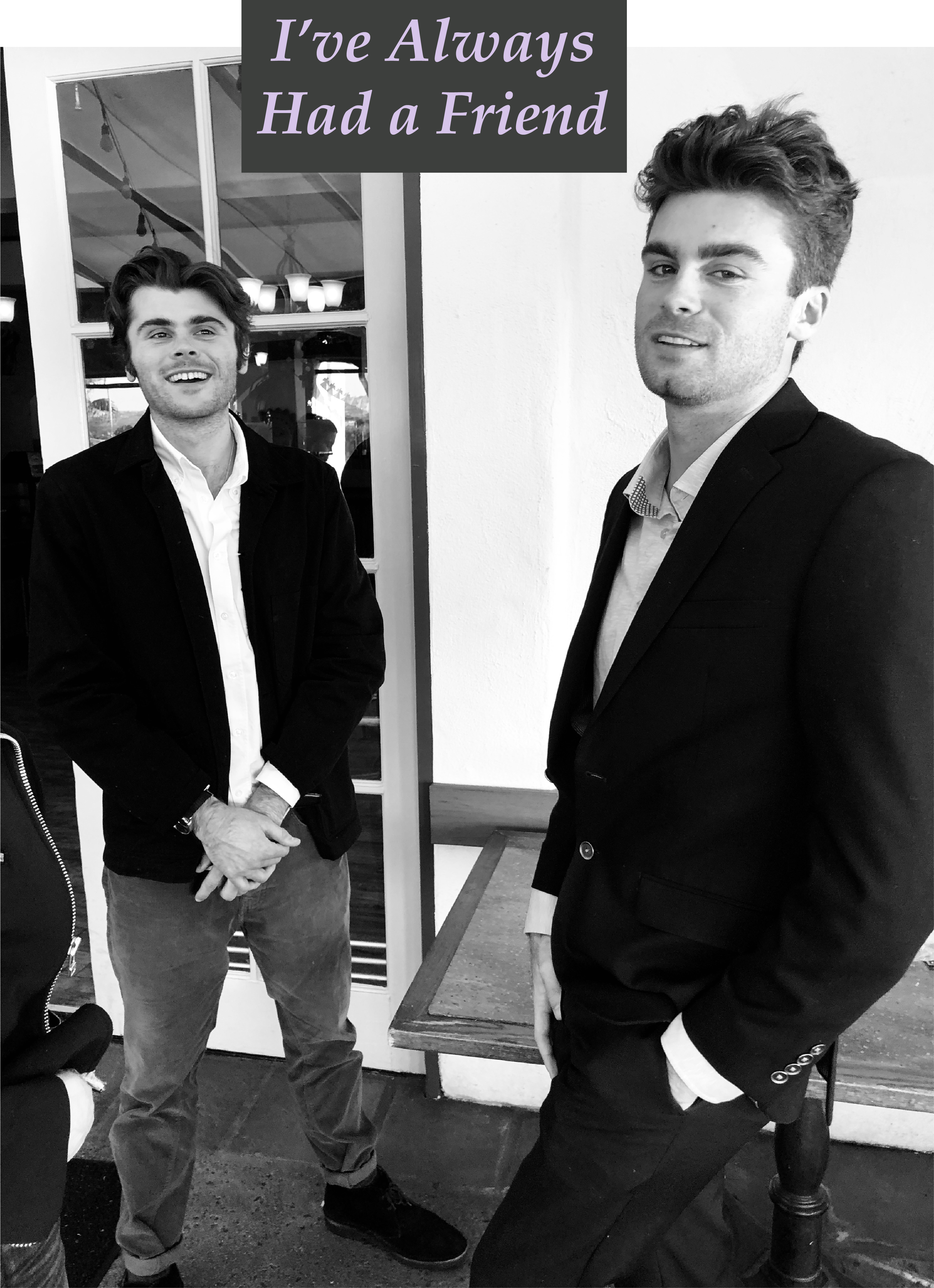 31 Oct I’ve Always Had a Friend

EVERY SECOND THAT FELL FROM THE NEON red clock felt like an eternity.

“Surfers, there are two minutes left!”

The unmistakable high-pitched voice of the announcer boomed over the beach. Chaos ensued, but the waves wouldn’t match. The ocean had been silenced.

I was ten years old; my eyes were red and puffy from an all-day event under the sun, commencing at the break of dawn. My brother, Duke, who was twelve, sat atop his surfboard in the peaceful ocean, praying that the seconds would quicken.

If he remained in his third-place position, he’d cruise into the finals to face some of the top surfers in the world, most of who are now professional.

The surfer’s yells in fourth place carried to the beach; the ocean was an arena, for there was not an ounce of wind to muffle his cries. He smacked the water in frustration, hoping for any wave to form from the ocean’s depths and give him a chance.

“Surfer in fourth, you need a 6.0 to advance! Duke Van Patten, you are currently in third!”

The heightening drama in the announcer’s voice only added to my anxiety. He’s got this, I thought. He’s going to make it.

I think I speak for the entire population of younger siblings when I say I attribute much of my childhood bitterness to my brother’s surf contests.

Maybe if they didn’t start at 5 am and take up my entire weekend, the few days I had off from school.

Or, if they weren’t in Santa Cruz or San Diego, a three to five-hour drive from our home in Los Angeles.

My brother Duke is an incredibly gifted athlete; he has been from a young age. First, it was soccer. Then it was surfing. When he gets obsessed with something, he will give his heart and soul to whatever unknowing endeavor procures his devotion.

From when I was eight until I was twelve, I spent the early hours of Saturday mornings sleeping in the family car’s back seat, as either my mom or my dad drove Duke and me to some far off California town.

My parents would always try to do something nice to level the playing field, but I was still moody. For some reason, I never took to surfing as Duke did.

I enjoyed it, and do now more than ever. However, Duke had an insatiable itch to be in the water as part of a community of surfers and surf parents who traversed the California coast every weekend to see how far their kid could go.

I didn’t appreciate these getaway weekends at the time. But what parent wouldn’t want to watch their kid do something they had a passion for at a young age?

That’s what being a kid is all about — getting excited about the little things and giving your heart and soul to something you genuinely love.

Without these trips, I wouldn’t have the nostalgic memories of smelling coffee and surf wax permeating through my dad’s car early in the morning.

I wouldn’t have the image ingrained in my mind of waking my sleepy eyes to the golden sun over the dark water, where beautiful, clean waves rolled in, unaffected by the evening wind.

On the beach, there would always be a few tents and a pack of hungry, bushy-haired surfers, awaiting the first batch of doughnuts from the local coffee shop. This was a place of worship for a kid like Duke.

Perhaps, I wouldn’t love to travel and explore and find the character of quirky little towns like my dad and I would do while waiting out the glacial hours between Duke’s heats.

These were bonding moments for my dad and me. He’d grab the neon fold-up beach chairs from the trunk and plant them on the cliff overhanging the surf. My dad was always prepared.

When Duke’s contests were up north, we’d enjoy sitting on the cliff on a cold, misty morning, bundled in jackets, sipping coffee from styrofoam cups.

Without these trips, maybe I wouldn’t look forward to experiencing the same thing when I’m a parent someday, encouraging my kid in whatever they aspire to do.

I don’t recall anybody else being as close to the water’s edge as I was. My mom was sitting on the beach watching, likely bundled in several blankets and a beanie the size of a Christmas stocking.

I was in my zone, just a kid with an arm in a cast, pacing back and forth along the shore like a day trader on the brink of a meltdown.

He’s going to make it. I couldn’t believe it. I watched Duke sitting patiently in the water, juxtaposed against the surfer in fourth. Duke was like a poised bullfighter, battling the raging bull. I was invested with my entire being.

I always wanted my brother to do well, not that I ever let him know. Everything we did was a contest against one another at that age.

We’re two-and-a-half years apart, the perfect distance so he had the older brother edge and wanted to kill me, yet I would feel strong enough to challenge him. That usually ended in me running for my life in sheer terror, after, just maybe, landing a blow in a skirmish.

I had my interests, and he had his. Some we shared, like soccer, skateboarding, and video games. But as kids, there was always something to prove.

I don’t think I ever said I was proud of him. You have to be a pretty impressive ten year old to tell your older brother you’re proud of them. But I was.

Maturing means encouraging others just because you want them to succeed, despite your own success.

He was about to make it into the finals in one of the most competitive contests of the year, and I was about to fall apart on the beach, waiting out the seconds until the blow horn would fire off like Fourth of July fireworks.

And then it did.

Duke tells me now of his perspective from the water, watching me pace back and forth on the beach with my hood up. I wasn’t in the car like I sometimes was. I was out there seeing this thing through. If he made it, so did I.

I think something changed on that day, not just for me, but for Duke, too. He saw that I care about him; I wasn’t just there because I had to be.

I wanted him to win, and I hope he knows I always will. While the other surfers had their coaches and devoted parents watching, Duke had me, and, well, my mom somewhere on the beach. We were an unlikely trio.

We were the underdogs.

He didn’t become legit in my eyes the day he made it into the finals of a prestigious surf contest.

It happened way before that, millions of years ago, when blood tied family together in love more powerful than anything.

He’s my older brother. I wanted to be like him — I told myself I wanted to be a professional surfer when I grew up, too. But I think that was just a place holder to fit in. I couldn’t care less.

There’s nobody in the world like Duke. He’s embarking on an incredible acting career, something he’s just as passionate about as he was surfing.

And he’s just as talented.

I’m doing my thing, and he’s doing him; yet, we’re taking life on together. I’ll always be in his corner pacing up and down the beach, now, without the cast.

Yet, I’ll still be praying, believing, knowing — he’s got this in the bag.