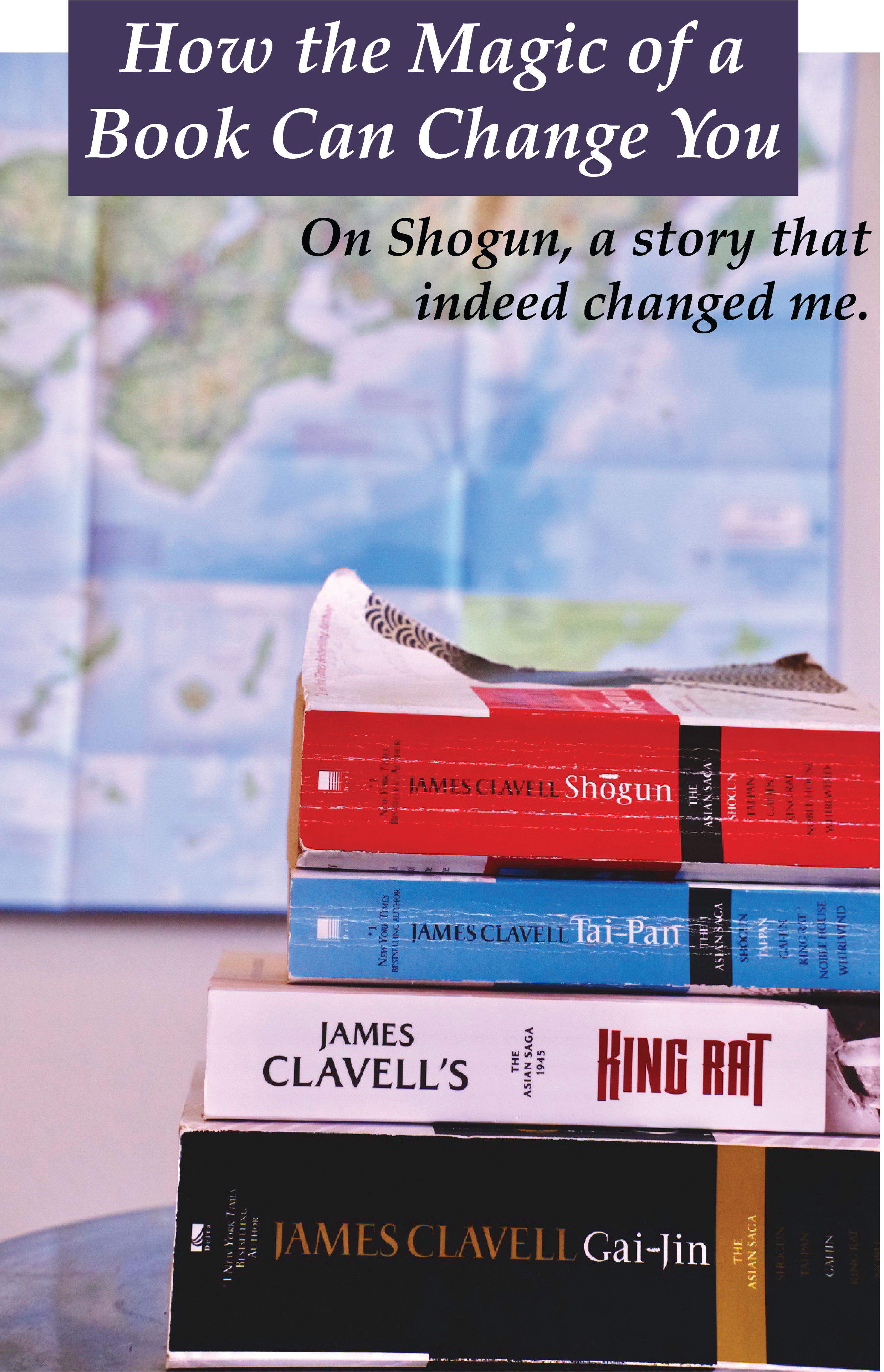 24 Jul How the Magic of a Book Can Change You

WHEN A BOOK TRANSPORTS the reader into a different time and place, it doesn’t matter how long it is. When dedicated, the reader will plow through until the bitter end, totally entranced by the story and characters.

You take the book with you wherever you go; you read a page here and a page there, unable to pry yourself away until the final page turns. It becomes a part of you.

A believable world starts with the details. From there, the story evolves like ripples of water expanding from a single drop.

This kind of captivating storytelling will make you see your world differently; it’ll inspire and make you question.

Perhaps, it will stay with you forever. These types of novels have the power to change your life.

One of these is Shogun — the epic of Feudal Japan by James Clavell.

Shogun is based on the real Englishman William Adams, a pilot of a Dutch ship in the year 1600.

Adams piloted the only surviving ship out of the original five in his expedition from the Netherlands with their sights on the west coast of South America.

After the other four were destroyed, he and his crew opted for the backup plan to sail across the Pacific. They ended up drifting to Kyushu, Japan’s southernmost main island.

The main character of Shogun, John Blackthorne, parallels the real Adams in many ways. He was an English merchant caught amongst the religious wars of the Age of Exploration.

The war between the Catholic Spanish and Portuguese and the Protestant English and Dutch serves as the backdrop of the story.

Immense empires were flourishing in the Americas and Asia. Yet the Europeans believed it was their right to spread Christianity and enlighten the planet to what they thought was the one true faith.

Shogun tells of how the first non-Iberian ship in Japan changed the political climate of a samurai ruled country; how a foreigner gains the trust and reverence of one of fiction’s most fascinating characters — Toranaga — the future Shogun and ruler of all Japan.

Some books are long just to be long. Some, like Shogun, deserve their length. As the pages soften and the cover fades, you feel you’ve changed yourself.

The book as a whole is incredible. But sometimes, just one line can have a profound effect.

The following line from Shogun is an example of the simplicity and quality found throughout.

As the samurai Yabu watches a petal spiral from a blossoming tree in the moonlight, he thinks of the poem:

Beauty is not less for falling in the breeze.

Shogun is the first in James Clavell’s Asian Saga, which starts chronologically with Shogun set in 1600’s Japan, and finishes with Whirlwind, set in 1979 Iran.

Shogun wasn’t written first, however. King Rat, the fourth chronologically in the series, was the first novel written by Clavell in 1962.

King Rat came from Clavell’s experience as a Japanese prisoner of war at Changi Prison in Singapore during WWII.

Changi became my university instead of my prison,

Among the inmates there were experts in all walks of life - the high and the low roads. I studied and absorbed everything I could from physics to counterfeiting, but most of all I learned the art of surviving, the most important course of all.

Clavell was born in Australia, although he lived in England since infancy. He joined the British Royal Artillery in 1940.

In 1942, after being shot in the face in Java, Clavell was captured and sent to Changi Prison. One out of fifteen prisoners survived.

At the end of WWII in the Pacific, James Clavell walked out of there at six feet and ninety-eight pounds.

He became an established screenwriter in the United States after the war. After keeping his Changi experience bottled up for many years, it took a screenwriter’s strike and pressure from his wife to sit down and finally tell the unthinkable tale of his survival.

Changi was set like a pearl on the eastern tip of Singapore Island, iridescent under the bowl of tropical skies,

Closer, Changi lost its beauty and became what it was - an obscene forbidding prison. Cellblocks surrounded by sun-baked courtyards surrounded by towering walls… For the men, Changi was more than a prison. Changi was genesis, the place of beginning again.

Like anything worthwhile, it took just starting to create a tour de force like the Asian Saga. Altogether the series totals over 6,000 pages. It sounds insane to take on as a writer or reader.

But Clavell began by merely sitting down and writing. This seed blossomed from his first epic tale of friendship, power, and survival, into a powerhouse series spanning over three-hundred-and-fifty years.

His diligence is a reminder that when something interests you, follow it, listen to it, and let yourself go down the rabbit hole of discovery. You never know where it may lead.

While King Rat is a gripping story based on Clavell’s own war experience, Shogun is deservingly the most popular in the series.

So why pick up a behemoth like Shogun in the first place?

Long books require the reader to invest their time, as finishing a massive novel takes dedication to the story, the characters, and the author.

However, when taken apart page by page, chapter by chapter, line by line, these larger novels are more than manageable. A book like Shogun takes time for the world to develop and the characters to become what they’re destined to be.

It draws you in with the smallest details and builds slowly until the reader sees through the characters’ eyes.

It gives you a chance to be a part of a different world, where you never know what lies on the next page.