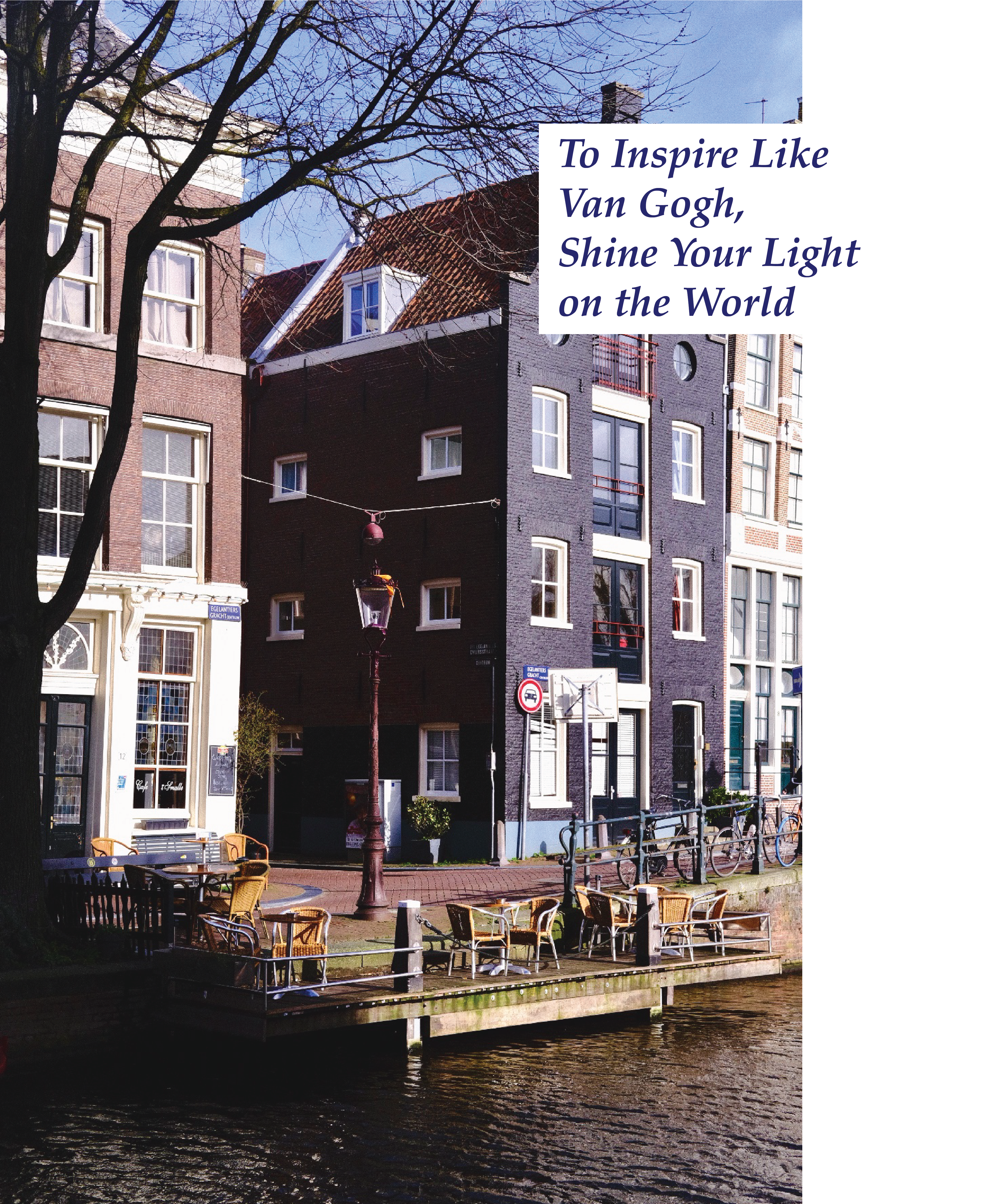 13 May To Inspire Like Van Gogh, Shine Your Light on the World

THERE ARE TWO TYPES OF PEOPLE — those who give energy, and those who take it.

When I stand on the edge of the sea and feel the palpable spray of the waves, a force rushes through me like a storm; I am alive.

For billions of years, this perennial source of strength has radiated from the earth’s core to flow freely; it connects us to the planet, to the mountains and the wind, to one another.

We, as individuals, are microcosms in the puzzle piece of the cosmos — our spirits intertwine more deeply than we know.

We preserve the same energy as the earth’s core within ourselves: the power to inspire. It’s as simple as a word of encouragement, reaching out to a friend and being there, truly being there.

There’s nowhere else to be, not pondering the past or worrying about the future; we’ll lose the moment if we do. Often being present is all someone needs to continue fighting. Right now, we could all use it more than ever.

THE DREAM OF VAN GOGH

Vincent Van Gogh is my favorite artist because he was fearless. He aspired to touch others through his work and give them the feeling that they were alive.

With each smooth brushstroke, stirring as the color of the sun — Van Gogh hoped to say; I am here for you, we’re in this fight together. We can do with our words what Vincent Van Gogh sought to do with his art.

He didn’t paint to create a fictional reality; he longed to grasp the essence of our world and share its light with others. In his letters to his brother Theo Van Gogh, we see Vincent’s vulnerability and passion for other human beings. Van Gogh writes:

In a picture, I wish to say something that would console as music does…

But inside of Van Gogh was a dark cloud. He couldn’t sincerely connect with others because he was so off-course. Nobody knew it. More likely, they didn’t care enough to help.

Van Gogh elucidates his inner turmoil in another letter to Theo:

A caged bird in spring knows perfectly well that there is some way in which he should be able to serve. He is well aware that there is something to be done, but he is unable to do it... There are no outward signs of what is going on inside him; he is doing well. He is quite cheerful in the sunshine.

We often don’t ask the truth of others because we assume all is well. However, this time we’re living through is an opportunity to change our daily interactions. We often pass others like two ships in the night. We’re aware of one another, but unwilling to dig and communicate honestly.

I am no better than anyone else. I’m often preoccupied with my thoughts, or I figure the other person would rather not talk at all. Nonetheless, every day is another chance to grow.

IN SEARCH OF PURPOSE

Vincent Van Gogh needed somebody there for him. He wrote to his brother regularly to fill his inner void; as an art dealer in Paris, Theo attempted to sell Vincent’s paintings. Yet, the art we today consider some of the greatest ever made procured no value until after his death.

Theo couldn’t help Vincent before he took his own life.

A just or unjustly ruined reputation, poverty, fatal circumstances, adversity; that is what makes men prisoners.. do you know what frees one from this captivity? It is very deep, serious affection. Being friends, being brothers, love - that is what opens the prison by supreme power. But without that one remains in prison.

In an attempt to fill his inner being with a semblance of light, Vincent tried to create the vivid, colorful truth he envisioned. But Van Gogh was lost without another soul to lean on. The burden he felt was too much to handle.

Right now, we’re all in the same distressing circumstance. To find peace within ourselves is not easy. Our insecurities have the potential to turn us into a ticking time bomb, waiting to erupt on the ones we love.

It takes quieting the noise and tapping into our natural tranquility to get through this.

But if we make an effort to be there for one another, to reach out when we don’t see the need, then we will not only survive but thrive.

Vincent Van Gogh loved people. If he could, he would be that rock for others. What he desired to do through his painting, we can do with a question of kindness and sheer curiosity; this is why we’re here.

I look at the work of Van Gogh, and I see simplicity — sweeping fields of yellow wheat, city clouds that make us feel meaningless in their guise of divinity. But Van Gogh was a tortured artist. He wanted nothing more than to express human nature, the very thing we often take for granted.

We revere Van Gogh for his inimitable painting; I believe his writing was just as profound. In a letter from 1878, he describes to his brother Theo a trip he took with his father to Brussels:

The sun was setting red behind the pine trees, and the evening sky was reflected in the pools; the heath and the yellow and white and grey sand were so full of harmony and sentiment - see, there are moments in life when everything, within us too, is full of peace and sentiment, and our whole life seems to be a path through the heath…

He writes as if illustrating his words; he felt a brief moment of inner peace. Nature was the only thing to provide him with pure happiness.

Van Gogh saw the world as a reverie: lucid and full of color. Even so, with nobody to share his dream, what he perceived in nature was bereft in his soul.

We are born free. Although too often, the strenuous nuances of the day filter into our consciousness and bring us down. There’s negative energy from the constant noise; it’s our job to protect our inner spirit.

Van Gogh painted to give others the joy of a beautiful symphony. We, too, have the impact with our caring words to provide the repose we feel when looking at The Starry Night.

We live in the world which Van Gogh painted — bursting with color and light. That inspiration comes from within; we don’t know who needs it — now, more than ever.