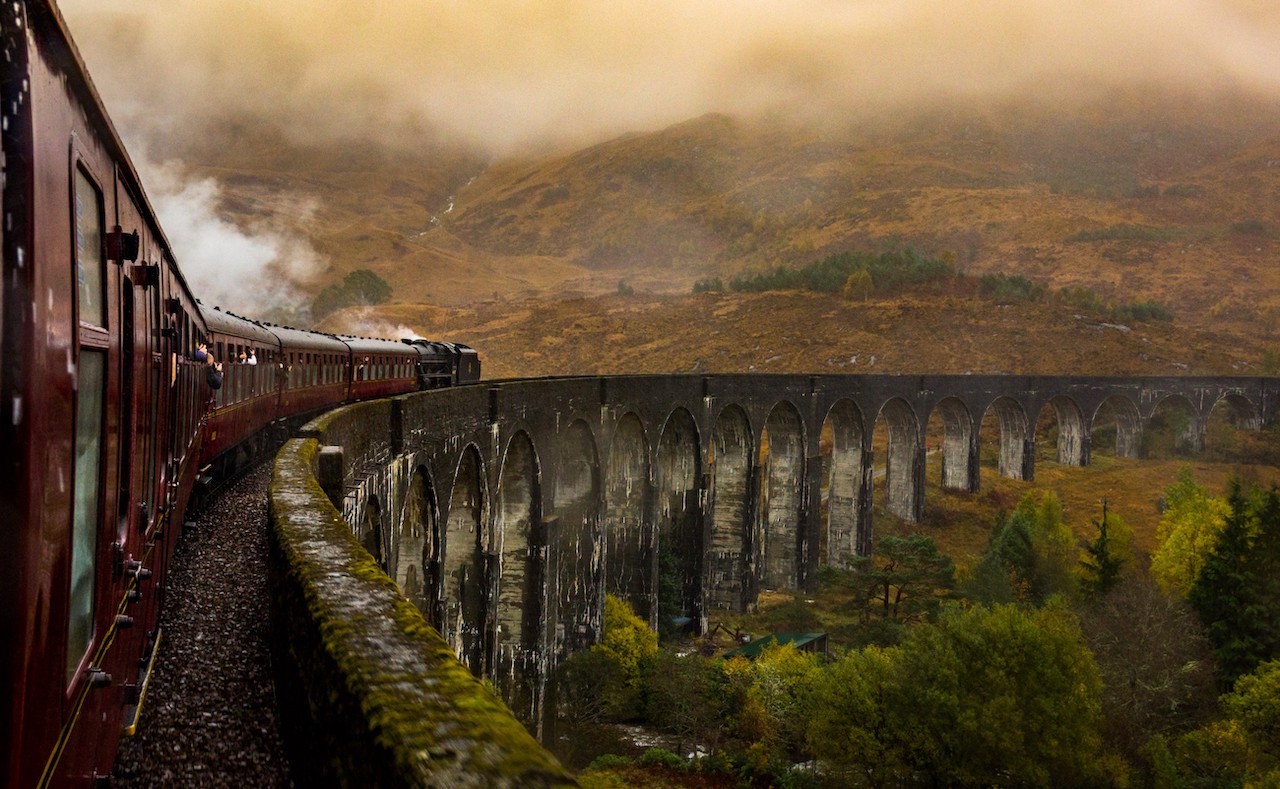 TRANSFIXED, I WATCHED THE GOLDEN SNITCH fly around the room as if under a spell. The golden ball, about the size of a fist with delicate wings, circled the room like a bird in a cage with nowhere to go.

I remember a sense of fear, good fear, thinking perhaps the Snitch may fly from the fan attached to a long string and break something, like me. However, the sense of wonder that this piece of art contained eclipsed my fear. The Snitch was a piece of art. Art transcends reality, yet helps us understand it. It surpasses the logical mind and speaks to something deeply ingrained in our human psyche.

I was a kid around nine or ten years old. My stepmom Eileen took a ball about the size of the fictional Golden Snitch from Harry Potter and painted it gold — the color of something pure, attainable, magical.

The ball had intricate grooves and felt valuable. Maybe that’s just how I remember it. She took eggshell-colored wings from a small angel statue and glued them to the ball — voila.

In the Harry Potter universe, the Golden Snitch is the flying golden magical entity in the game of Quidditch, chased after by the seeker of each team. As kids, the Golden Snitch captivated my brother and me as if we were seekers ourselves. Maybe we were, yet we didn’t know it. What we did know, however, is that we loved Harry Potter, like the millions of others delighted by this fictional, yet relatable world.

The game of Quidditch takes place in an oval stadium that acts as a common boundary for the players soaring through the air on broomsticks. Three Chasers try to throw the Quaffle, a ball about the size of a basketball, through rings resembling the emblem of the Olympic games.

Two Beaters on each team have bats to protect their team from the wily Bludger, the fierce flying ball that seeks to nail the opposing team members.

Then, there are the seekers, one member of each team whose aim it is to capture the Golden Snitch. If accomplished, the team gets a hundred and fifty points and essentially wins. Harry is a seeker.

The Snitch embodies the object of our search for meaning in this life. I didn’t know it then, as I’ve just begun to understand the deeper implications of Harry’s timeless story.

Moreover, I’m only just realizing how beneath the surface, Eileen’s thoughtful act of joy may very well have made me who I am today. She brought magic into my life. She made me believe I’m a seeker.

The seeker often gets fouled; they may defy the rules by following the Snitch outside of the boundaries; they bear the weight of the team. Harry is a seeker for a reason. His story begins as an ordinary boy left to live a life of misery with his cousins, the detestable Dursleys. But Harry isn’t normal; he’s destined for something much greater.

His hero’s journey unfolds at Hogwarts, where he repeatedly captures the Golden Snitch, makes lifelong friends in the lovable Hermione and Ron, and ultimately defeats Voldemort, one of the greatest villains in all of fiction.

I never read the Harry Potter books (I still plan to, don’t worry). But Eileen would read them out loud to us, using different voices for the unique characters to make them come alive. The books are so rich that they didn’t have any trouble coming alive on their own.

A sense of otherworldly magic imbues the story of Harry Potter; yet this magic exceeds that of mere wizardry and witchcraft. Harry’s story is an all too relatable one — a kid who believes they’re insignificant. But then, it takes an act of encouragement from the warmhearted behemoth of a man, Hagrid, to tell him he’s worth something. That’s the magic of the real world.

Harry comes into his own; he finds his place; he makes friends who are battling, too, but they learn to fight together. Harry becomes not only his own hero while on the adventure of a lifetime, but the hero that the world needs.

I recall the Golden Snitch, this object of beautiful chaos, as the symbol of everything the universe of Harry Potter stands for. In his book Beyond Order: 12 More Rules for Life, renowned psychologist Jordan Peterson describes the Golden Snitch as the thing of value we all desire, the round chaos, something more than worth attending to, a reason for being.

Among the alchemists, the round chaos was associated with the winged god Mercury who served as messenger from the realm of the divine, guide of souls to the underworld, and bringer of good fortune,

Imagine that there are very complex processes going on in your mind unconsciously, highlighting events of potential worth and distinguishing them from everything else constantly unfolding around you. Imagine that those processes that distinguish value are alive, which is certainly the case, and that they are complex and integrated enough to be conceptualized as a personality. That is Mercury. The draw he exercises on our attention reveals itself in a sense of significance - in the sense that something happening around you is worth attending to, or contains something of value.

Peterson discusses how those who take that sense of significance seriously are seekers. This is the case in the world of Harry Potter and in real life as well. Therefore, Harry’s story captivated us by the millions.

The Seeker is therefore the person who is playing the game that everyone else is playing (and who is disciplined and expert at the game), but who is also playing an additional, higher - order game: the pursuit of what is of primary importance. The Snitch (like the round chaos) can therefore be considered the ``container`` of that primary significance - that meaning - and therefore, something revelatory when pursued and caught.

It’s difficult to grasp the profundity of the moment in the movie when Harry sees the Snitch for the first time. As a kid who by no means felt alone in this sentiment, I no longer existed in my own reality. I was a part of this magical world where a seemingly ordinary child became the hero of their own story.

To be a seeker is to master the ordinary game of life: the trivialities, the mundane, and the ability to integrate into modern society. This is important and can’t be overlooked because in our repeated daily routines, we develop our character, our values, our skills. But to be a seeker means to recognize there’s something more.

First, we must abide by the guidelines and master the skill of riding a broom in the confines of the stadium. Once we do this, there’s a higher calling to pursue. It soars through the clouds and ether where it’s cold and dark and the unknown lurks.

But on the other side lays genuine meaning. The light of the sun exists beyond the clouds; that light is attainable if you soar high enough, if you seek something true and good and believe that you are a seeker. To be a seeker is to realize there’s more in you, there’s more to this; together, these two possibilities create the potential of what could be. Peterson writes:

You are not only something that is. You are something that is becoming - and the potential extent of that becoming also transcends your understanding. Everyone has the sense, I believe, that there is more to them than they have yet allowed to be realized. Who are you? And more importantly, who could you be, if you were everything you could conceivably be?

As I gazed up at the ceiling fan and watched that object made of gold and angel wings fly around my childhood room, magic became manifest. My stepmom has always been a creative inspiration in my life. Yet, I didn’t know that simple acts like this would indeed change my life.

We’re all creative; yet without the encouragement of somebody like Eileen or Hagrid, she’d love that comparison, we may not see it in ourselves. To be creative is to see the world differently — that doesn’t mean living in a false reality.

But maybe reality is a place where genuine magic exists if we open up our hearts to it — if we gaze up and believe in it.

If we believe in ourselves.

Understand the rules; solidify yourself in the confines of the game. But then don’t be afraid to push against the walls in pursuit of something more important, the manifestation of meaning, joy, beauty — genuine purpose.

You have something to give to the world, and you must find out what that is. Don’t remain a chaser forever. There’s far more out there beyond the stadium walls.

The story of Harry Potter is the same story that human beings have been telling since the beginning of time. Therefore, it’s relatable, profound, as powerful as a dream that stays with you for a lifetime. You wake up shaken time and time again from this too-real dream. That dream is you, and all that you might be.

We have been observing ourselves behave - in our success and failures - for tens (perhaps hundreds) of thousands of years,

During that time, our shamans, prophets, mystics, artists, poets, and bards have distilled something vital from such observations - some concentrated essence of what makes us human in actuality and possibility. Those creative people write and act out the dramas and tell us the stories that capture our imagination, and they fill our dreams with visions of what might be.

It isn’t easy to be a seeker. Yet it’s in the times of difficulty when we’re challenging ourselves to get better, to grow, to seek what is meaningful, where we find true fulfillment in life. We discover what is new; we learn about ourselves, and we become the hero of our own story.

Who could you be, if you were everything you could conceivably be?