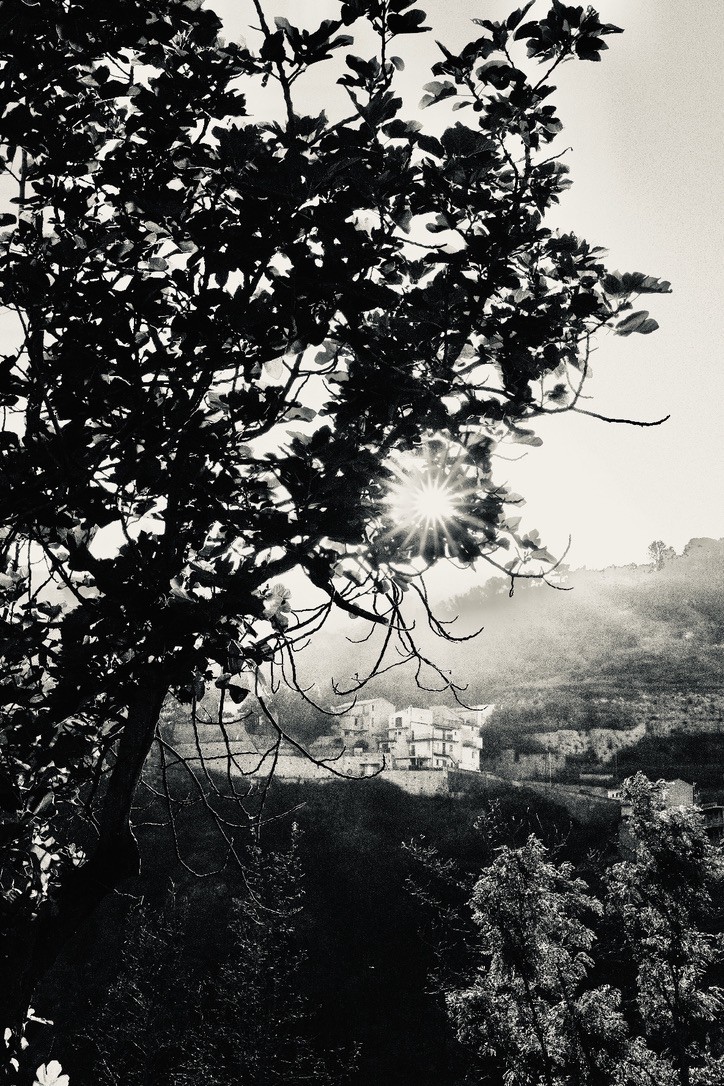 IN THE SILENCE of the early morning, the traveler hears nothing but her breathing. She studies her surroundings and takes stock of her senses: The world outside the window of her room is dark, and a haze rests above the forest, the river, the valley; the mountain rises from the morning haze and watches over all.

The haze will be gone by midday, when the world she’s come to know becomes bare. Little mystery or opportunity, and what she wants is no longer here.

The room is swept clean and dimly lit by nothing but the bedside candle. She likes to let the morning sunlight naturally brighten the space.

She isn’t bringing much — everything she has. Everything that matters. Pictures she cares for which make her smile. A journal; a few tools and a book.

Whatever else she needs, she has within her — courage, light, wonder — that’ll keep her going.

The glow of the room changes as the minutes pass. It becomes imbued with a dark pink light which slips through the open window and falls upon the wooden floor. She must move now before distant shapes become distinct.

Nothing’s been done; the journey won’t begin when she leaves the door; it’s been gradual, yet it began the moment she realized the mountain couldn’t possess her, the way it does when you don’t know what exists beyond it.

When that’s all there is, perceptions become a sort of barrier that can’t be surpassed or questioned. The roof of what one is willing to seek falls.

There’s nowhere to go when we imagine there isn’t, until an idea, a spirit, a word, crosses that threshold which contains the extent of the universe. Everything changes.

She doesn’t know where leaving will take her or for how long. She was a child when the word of Sage touched her mind and heart. That was the day she decided to one day leave and face the uncertainty that the journey will bring — that uncertainty is what she’s ultimately after.

A life without uncertainty is a question that’s been answered.

From the traveler’s home, it seems the top of the mountain touches the stars, the clouds, the moon. The moon pulls the mountain and the mountain pulls the moon, and they reach for each other until the sun rises and the moon fades, and what’s left is the distant mountain, cast against an impossibly blue sky.

The valley provides perspective — a closeness to the world, where one lives looking up at the trees. At the sky. At the mountains. She doesn’t know what she will find from crossing the valley, the forest, the river, just to reach the Mountain of her Soul. She’s being called.

That same force which draws the moon has reached its hand to her; she can seldom sleep without the dreams that life consists of more.

She works throughout the day, studying and training with the land. She gives everything she has to be good, to be strong.

But there must be more, and if she doesn’t go, if she doesn’t leave to discover what exists beyond the Mountain of her Soul, life will feel unfulfilled.

What that means she can’t be certain, although she remembers the words of Sage: One finds harmony by the strength to break it.

Her being has shifted, her drifting mind and longing soul need reconciliation.

The traveler gives back to the world in whatever way she can. That makes it worthwhile. She’s appreciated, helpful, a light in an often dark world.

In the summer she patiently awaits the colder days of autumn, where the changing colors of the leaves and the way the earth attains a certain richness fill her with gratitude.

She knows when the time has come, not a second sooner nor later. It’s in the air, a depth and understanding that can’t be described in words, not any she knows, anyway.

She feels it, the continual maturing, dying, and rebirth of nature exemplified by seasons. As the seasons change we humans change too; the earth is traveling further into itself, yet the world knows what it is — that’s the perfection of nature — mathematical codes expressed through beauty in the wild.

The traveler has a sense, yet she barely knows who she is, who she could be, or even what she wants to be. Far from perfect like the bark of a tree, the sound of a rainy night or the first touch of spring — she simply wants to be, which is difficult to understand.

She hopes to learn what being is.

Sage called her the traveler when she was young.

The traveler has never spoken much; her eyes convey all she wants to say. They are always looking; not erratic, but with a keen sense of care. They look.

But what has she seen?

Something else, somewhere else but here. That is why she’s the traveler; her mind, eyes and heart are called beyond the mountain.

She’ll miss it here; the room is golden now and warming.

Its scent is fresh as the leaves in the forest. The smell of them carries through the land and fills her room with the spirit of the wind.

This is what she’ll take with her; this is what will fortify, comfort, and inspire her — that imperceptible touch of home which can only be felt.

The feeling doesn’t have a name beyond what the traveler can sense. That’s the feeling we share, home within our hearts, and when we touch on what makes us feel at home, we share something profound. Perhaps what makes this life worth living.

We want to find home, and often have to make it for ourselves with the spirit we carry. That we can take anywhere, and share.

The traveler may reach, climb, transcend the mountain, in this life or the next. She may never reach the mountain. That was never the point. It’s what the traveler discovers from leaving the room, where nothing’s left but light.