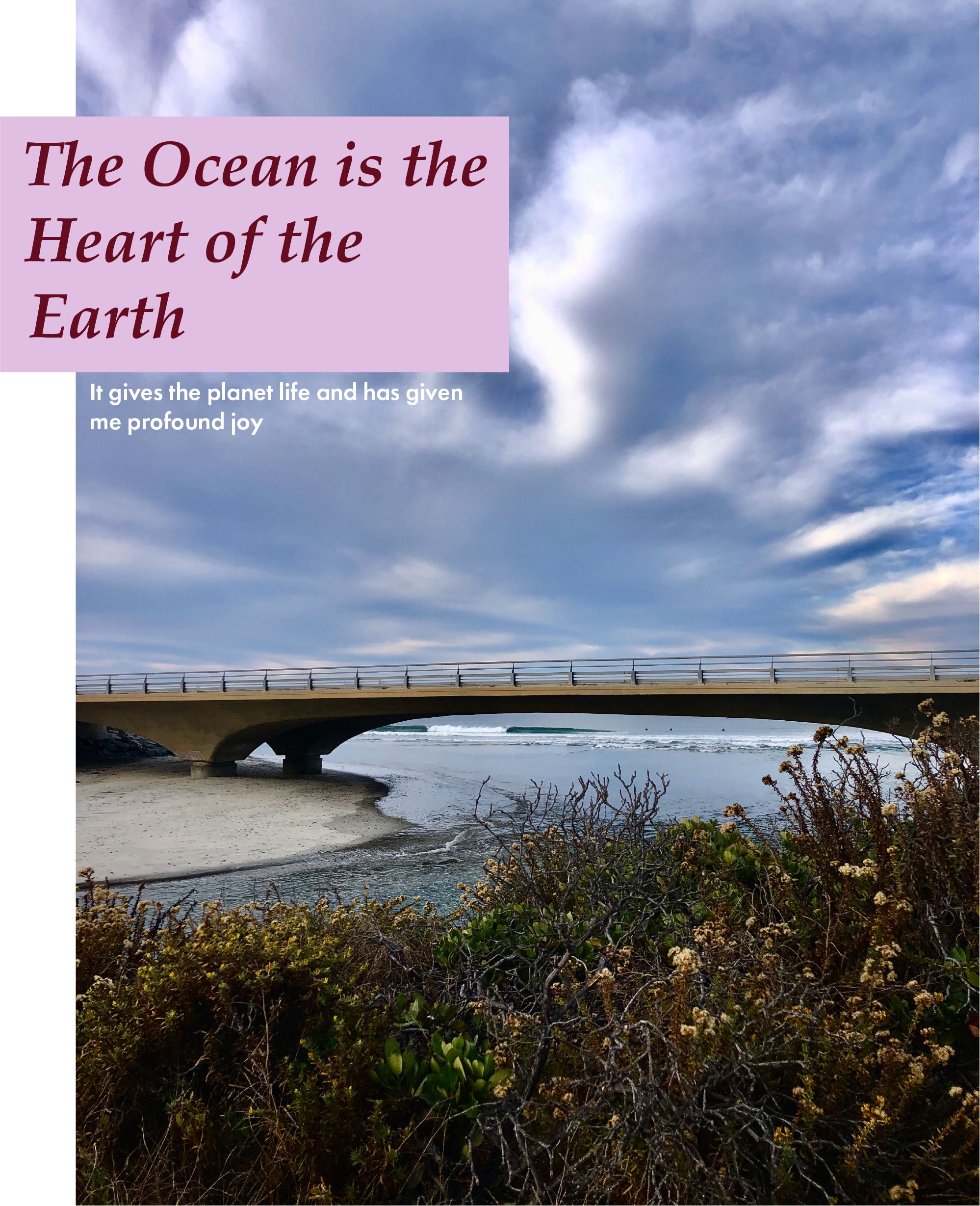 06 Nov The Ocean is the Heart of the Earth

FROM THE EYE OF THE SOARING BIRD flying above, I imagine the waterways connecting the ocean and the marshland look like intricate human veins.

My ground-level view is different, although no less beautiful. The warm glow of the rising sun plays with the dark morning clouds and gives them a three-dimensional shape; they look as if they’re spinning tops on the surface of the planet.

It’s about a half a mile across the marshy ecosystem to reach the Torrey Pines Natural Reserve’s crest.

The black silhouettes of individual Torrey Pines line the crest like vertebrae stemming from mother earth.

I’m headed down to the ocean to take a dip before the day heats up. However, this canvas full of nature’s brushstrokes is too captivating to pass without appreciating.

The ocean provides vitality, exercise, freedom, and connection. With every morning plunge, I feel connected to my family and what we love, those both here and smiling down from above.

Moreover, when I paddle through the salty waves, a bond is formed between my spirit and the world, not only with others around me enjoying the gift that the ocean gives, but to people of distant coasts and the creatures that call these waters home.

The ocean is the connector of life, the beating heart of the planet. I feel it’s home, wherever I am.

Standing on the hard-packed sand, it takes one sweeping panoramic gaze — from the horizon beyond the marshland and back to the ocean — to recognize the earth as a living being in constant flux.

I think of the great Renaissance thinker and creator, Leonardo da Vinci, as I admire the scene of this lively ecosystem.

With the spine-like mountain range, the lagoon connecting the ocean and the marshland, the glowing sunrise and the still visible moon, I can’t help but be awestruck.

Leonardo da Vinci wrote of the earth as it compares to the human body, especially the ocean, which he considered the heart that nourishes the rest of the planet.

In his notebooks, which the esteemed biographer Walter Isaacson explores in his Biography of Leonardo da Vinci, Leonardo wrote:

The body of the earth, like the bodies of animals, is interwoven with ramifications of veins, which are all joined together and are formed for the nutrition and vivification of the earth and of its creatures. Its flesh is the soil, its bones are the arrangements of the connections of the rocks of which the mountains are composed. Its blood is the veins of waters; the lake of the blood, which is throughout the heart, is the ocean; its breathing and the increase and decrease of the blood through the pulses in the earth is thus: it is the flow and ebb of the sea.

Saltwater runs into the marshy lagoon from the ocean and mixes with the freshwater of the rivers and streams.

This salt-marsh serves as the border of land and sea, like the purple layer of the atmosphere which acts as the frontier of space and the earthly blue sky.

The moon is still visible behind the drifting dark morning clouds. Yet, whether the moon hides under the guise of day or shines to illuminate the night, it causes the earth’s heart to ebb and flow.

A bridge crosses over the waterway between the lagoon and the ocean. Yesterday, the tide was high, and the waves rolled forcibly below the bridge into the lagoon.

Now, they gently glide through the shallow water — a visible change of the moon’s authority.

A train passes along the bridge as if it’s riding the ocean’s horizon. The fading moon above and the waves below provide a remarkable sight, what I see as a symbol of the coexistence between all things.

The waves are travelers. They’ve perhaps been generated from some far-off depths and have seen many lands and different people; they’ve cocooned prehistoric beasts and served as highways for innumerable creatures.

Close to shore, we surf these forces of energy for a few seconds as they crescendo for their final performance.

Now, they pass under the bridge to enter a land where they’ll slowly dissipate, coalesce with the fresh, and trickle into the marsh to nourish a different type of species. I watch them as they end their journeys.

Being by the ocean will always provide a sense of home. I grew up listening to its lulling sounds; the cool salt air eased my mind as it wafted through my high-school halls. It has given me so much to be thankful for.

But if I’m not by the ocean, I’ll still be happy. The world is a constant source of inspiration, no matter where we are.

Like the human body which Leonardo da Vinci passionately studied, everything about the world intertwines.

The features of the earth, creatures, humans, we are one environment in flux. It just takes some imagination to see the world for what it is, a body and home to us all.