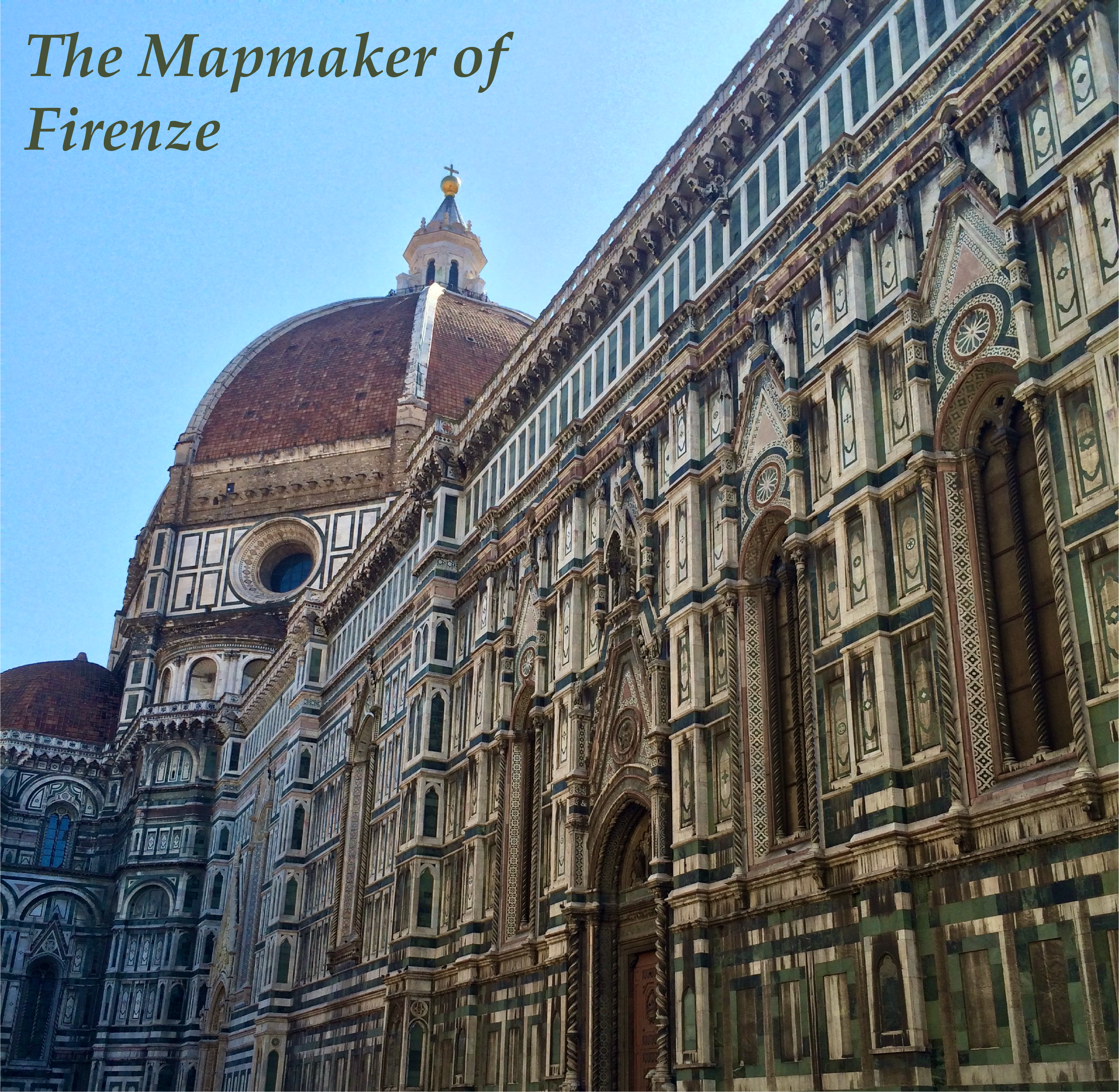 09 Oct The Mapmaker of Firenze

UNCLE SITS AT HIS DESK WITH THE HELP of the candle flame, reading about the newfound discoveries of the world. The ocean must be endless, extending for as far as one can see until a new world rises from the dark blue depths, and we believe it’s ours. What lies beneath our ships? What truly swims below? Uncle says a ship is no place for a boy like me, but I don’t think anything could be worse than this dusty workshop with maps stacked to the ceiling. I watch him study the maps of Ptolemy and the medieval Mappa Mundi. But what did they know of the world? They knew what they had, just as we do. We know nothing.

When uncle is ready, he dips his quill into the ink vessel and lets it sit, like a sword burning in a cauldron of fire. The ink alters the pen, his chosen weapon for the fight ahead. Then, slowly, the black liquid drops onto the page and bleeds, like the warm blade against flesh. He wields the goose-feather quill with the accuracy of a man obsessed. This man changes how we see the world.

But what am I to do? I’m supposed to learn his craft and become an artisan like him, making maps for the rest of my life. He thinks this life is safe, secure, and enjoyable above all else. He loves maps, the smell of the woodblock, the putrid black color of the ink, the rolls and rolls of paper bound tightly with a single string of twine, showing how the world has changed. But I long for something more.

I’m not destined to sit here beside uncle at his desk, watching how he builds the architecture of Firenze from the ground up with the tip of his pen. I long to be out there to see the coasts of the Americas with my own eyes. In two years, possibly three, I’ll have worked enough with uncle to start a workshop of my own here in Firenze. If that’s the case, I begin my slow descent into Purgatorio, neither here nor there, but existing as a soul unfulfilled, awaiting the day when I’m free from work, yet too far gone to search for what gives life meaning. The rain continues to fall on this little shop on the edge of the Arno. The rain brings me joy; perhaps the water rises from some far off sea to fall on our formidable republic, here in what we think is the center of the world.

Leo left his uncle’s workshop and moved through the labyrinthian Florentine streets like a ship without a compass. His footsteps carried hardly any weight, for the stones on which he stepped felt no pain at all compared to him. The rain continued to fall. Leo sauntered through the moonless night, dragging his hand against the walls of the city.

The gentle rain, cold and cleansing, washed away the dust of the last ten, twenty, thirty years. The city appeared bereft of all inhabitants at this late hour, except for one man who stood stolidly on the bank of the Arno, a fisherman whom Leo had seen before.

Leo stood on the Ponte Vecchio, watching how the fisherman paid no attention to the falling rain. His body showed signs of wear, age, daily use, and struggle, yet his soul was firm and resolute, seemingly intact. Leo felt compelled to go and speak with him as if he had no command over his actions. He descended slowly down the shallow steps until he reached the sandy bank, now as soggy as the swamps of Venezia. Every step pulled him closer to the center of the earth.

“Why do you fish in the rain in the middle of the night?” Leo asked, not of his conscious volition. He’d have to speak up, for the rain fell harder every second, penetrating the river’s surface like Roman coins of antiquity.

“Why do you fish in the rain in the middle of the night!” Leo exclaimed to the fisherman. The fisherman took a breath to let the question simmer.

“This is when the fish bite,” he replied, without turning his neck to face the boy.

“Well, have you caught anything?”

“If I’d caught anything, would I still be out here?” The fisherman took no heed of Leo. His gaze remained fixed on the water. The surface of the river melted into nonexistence. It seemed to be rising from the earth back into the sky. The river and the sky and the space in-between inhabited by humans coalesced into one heavy gray night.

“I suppose not,” Leo said with a tinge of rejection in his voice.

“Yes, I would. I’m not here to catch fish, boy. I’m here because it’s the only place for me. I’ve seen what’s out there; greed, murder, riches. They mean nothing. I’d rather be here in the rain.” Leo left the man, no longer wishing to disturb his peace.

I worry about the boy. He longs to board ships set for America and carts en route to Asia. He knows not where his duty lies, here in Firenze as an artisan. I too hungered for the same adventures at his age, before we had any clue what laid beyond the distant horizons. Now we know; we’re unwanted. Why would we be accepted into any new land with open arms? What does he expect to uncover? That they are no different than we? That their food is better salted or their wine is less demanding? We have what we need here, where we need not leave to find spectacular art or fatty foods. They come to us.

The boy has talent; he has an eye for beauty and the hand suited for intricate detail — but if he has the will or the brain to realize what he has, that I do not know. The sound of rain on the tile roof hasn’t been this loud for as long as I can remember. The boy is back, no doubt, from one of his nightly escapades: signed yours, Francesco.

The boy and his uncle left the workshop as they ordinarily do, although this would be no ordinary night. The torrential downpour embraced the two men like a shawl around their shoulders. Water rushed through the streets of the medieval city; it fell from castle walls and tore down the branches of the citrus trees that inhabit Tuscany’s surrounding hills. The Arno rose, and the banks grew swollen with nowhere to go but up towards the heavens. Firenze stood prepared for a siege from Europe’s great armies, but no city is ready for the pouring rain, not when it falls with a vengeance.

The pair resembled a father and son as they walked, except for the distance which formed between them. Their collective gait portrayed a business-like relationship between a boss and an apprentice rather than one of kin. The same warm blood joined Leo and Francesco in their veins, the blood which keeps the body alive and causes steam to rise from one’s pores on a cold spring night.

They entered the Piazza del Duomo, the city’s beating heart, and looked up at Brunelleschi’s dome. The iridescent pink and green hues of the building shimmered from the rain. The water washed away the dirt and grime. The cathedral looked pristine.

“We’re going in,” said Francesco before he rounded the facade of the great building.

“What?” Leo’s uncle was already gone, and when Leo turned the corner, Francesco had slipped into a side door Leo had never noticed. How have I not seen this door? I guess with people usually shoulder to shoulder walking through the square, there’s no room to catch it, thought Leo. He followed his uncle under the moonless night. Francesco was already ascending the spiral stairs, one after the other, he stepped with a virility Leo had never seen.

“Uncle, what are we doing!” Leo called out, but his uncle continued. Il Duomo’s cavernous interior muted the sound of rain. No light entered, save a few colored rays, which found their way through the translucent stain-glass windows. Francesco was heading towards the top of the dome. Leo had never been to the top, nor had he wanted to. Usually, he felt weak at the knees when high up off the ground. Yet when he saw the vigor exuded by his uncle that night, he had no choice but to follow. They rose higher through the architectural marvel, around the dome as if they were flowing with the spiral of a river eddy. When Leo reached the top, out of breath and panting, he only saw the small exit opened into the night. He exited the dome and looked out onto the city.

“What do you see,” said Francesco, softly grabbing Leo by the shoulder, something he’d never done.

“Rain!” The rain was overbearing now, the likes of which the city hadn’t seen in at least a hundred years.

“Leo, what do you see!” The city was barely perceptible through the veil of water. Leo had to focus on discerning what his uncle needed of him.

“I see Firenze,” exclaimed Leo with conviction in his voice. “I see a city crumbling. I see the beauty that’s taken hundreds of years to build falling with each second. I see the gardens where I used to play, and the river where I’d watch fishers and boats come in. I see Tuscany in the distance, barely. I see its green hills staving off each hopeful army. I see the city you’ve drawn, year after year, each time better, each time illuminating some aspect I’d never noticed. I see our life, your love.” Leo looked at his uncle, yet he was looking elsewhere. Then he turned and looked Leo in the eyes.

“I know you want to see the world, Leo,” his austere uncle said. “When I was your age, I too was eager to find something out there that spoke to my soul. But the world is not such a welcoming place. This city will fall to greed, it will fall to corruption, as all great cities do before long. You must be strong and fight back when the city asks you to. You must know it better than anybody else. I’ve been coming up here since I was your age, and I’m afraid before long, we won’t be able to again. Always, no matter where the wind blows you, remember where you came from.”

They began quickly packing what little things they had to take with them. The city was crumbling, washing away with the rain. It purified the streets as it washed away the past. Facades would be no more; statues would break down; even the grand Palazzo Vecchio began to flood.