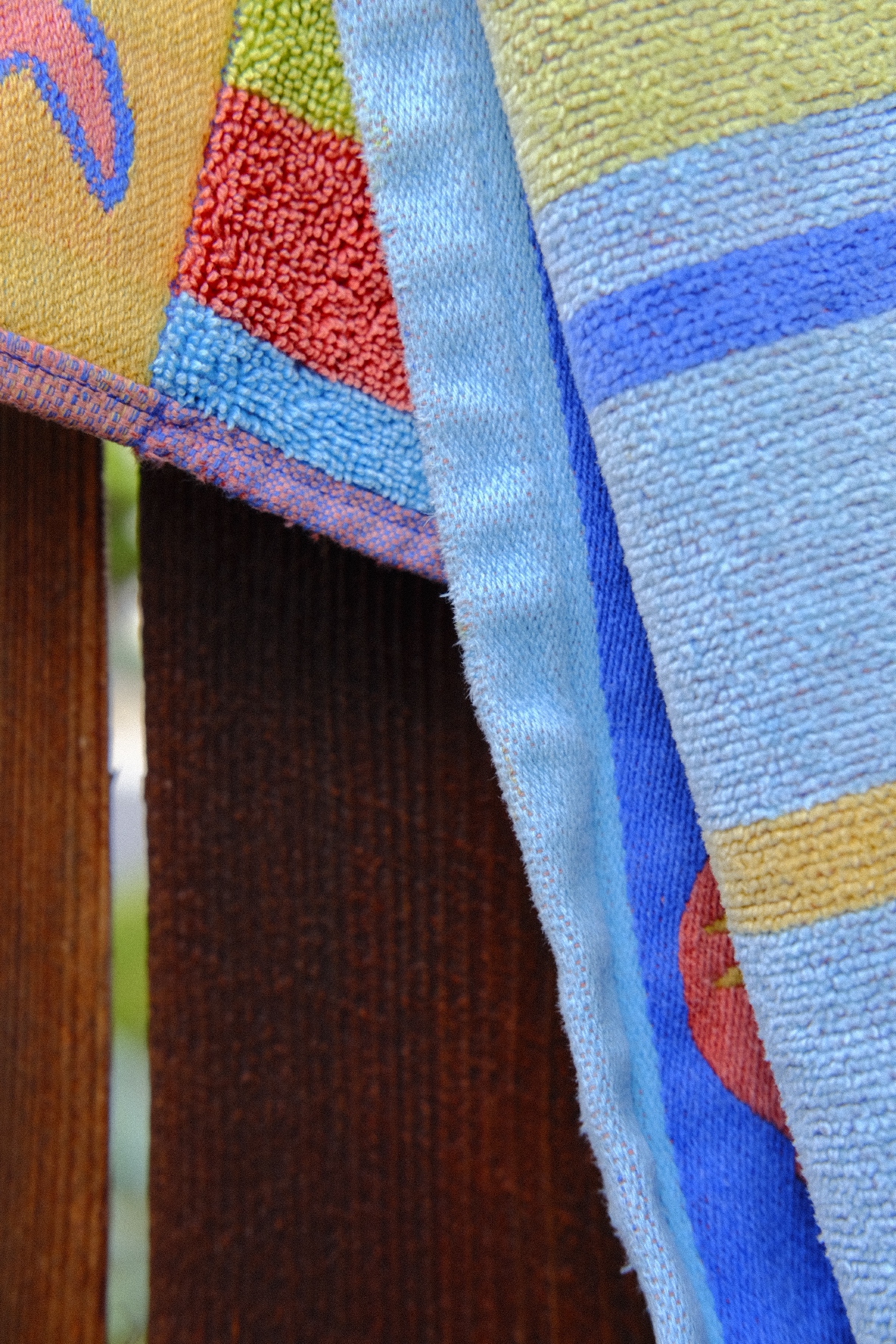 THE BEACH TOWEL is a faded blue and yellow with white stripes and red dots. It hangs from the wooden fence outside my front door. When I first moved in, I thought I shouldn’t leave it there, so the facade of the house wouldn’t look disorganized.

But now I leave it, perhaps to give walkers the feeling of summer, to say, it’s not over yet, as if while I continue to hang the towel, the season shall carry on. It’s the first thing you see when you come to my front door. You can’t get in without grabbing a hold of the white string that loops through the wood, and to grab it, you’ll have to get close to the towel. You may then catch its scent.

The smell of a damp summer day. Of salt that clings to each individual fiber and dries and cracks in the sun. When sand begins to dry and fall from the towel’s grasp and onto the asphalt walkway. The towel and the fallen sand add a playfulness to the entry, something I find it hard to clean or remove from the entry, or from my being.

I don’t know where the towel came from.

Who remembers when they actually bought the towel that becomes so familiar over the years? I think it comes from necessity; you reach the beach, or the proximity of the beach, and realize you don’t have a towel. You go to one of the small beach front stores that sell tourist shirts and pales and buckets, trinkets, maybe ice cream. You buy the towel, not knowing if it will last for the weekend or for thirty years — not knowing if it will wash away one day in the surf, or if it will travel around the world, lay upon different colored sands, white and soft and fluffy, or black and crystalline, or if it will separate your bony bottom from a rocky shore as the final threshold of comfort on a beach of mini earths.

One can’t know what the future will look like on the other side of a decision or an action taken — if it will work out, if it will be what one expects, what they hope for, what they believe they are due. You have an idea that the towel will remain intact and strong by the feel and the strength that holds the fibers together. But one can’t know the precise circumstances that will require its utility, as life is too complex to predict. We barely know ourselves, and endeavor every day through our actions to better know who that person is.

We can’t determine if we’ll need the towel in the most dire circumstance, if it will show up, dry and folded in the back seat of our car when we need it the most; we can’t predict if it will only and ever be used just for ourselves.

That moment couldn’t have been predicted. But one day, when you bought the towel, you took a leap of faith, knowing that in some capacity, this thing will help you get to where you want to go. It will shield your butt; it will sit there at the ready to dry you, perhaps, giving you the confidence you need to get back in the water, even though the sun is low, even though there’s nobody out and a darkness is falling over the world. But that’s what makes it beautiful.

A decision is made at the convergence of day and night. Get in the water; it glistens and is now an opaque purple. Get back in the water, because the towel awaits and isn’t going anywhere.

You take a chance and you might be cold, but swimming is the one thing that liberates you; when a slight fear of the unknown lingers at the back of the mind — maybe it’s sharks, or a current, or a rogue wave. But the payoff is worth it. The fear emboldens you; it makes you feel alive, that there’s actually something to this beyond the walls of safety we’re so often confined by.

You take a chance because you believe deep down that the universe has your back, and no matter what, you’ll make it through this a better person, a stronger person, a more capable person.

So you try. Your conscience tells you to go, and you do, and when your feet first sink into the soft sand that marks the initial point of contact with the ocean, you feel the liberation. Because now, you’re no longer one foot in and one foot out. You’re all in.

On the beach, the towel lays; faded, bundled and dry. Waiting for whatever happens, urging you forward.