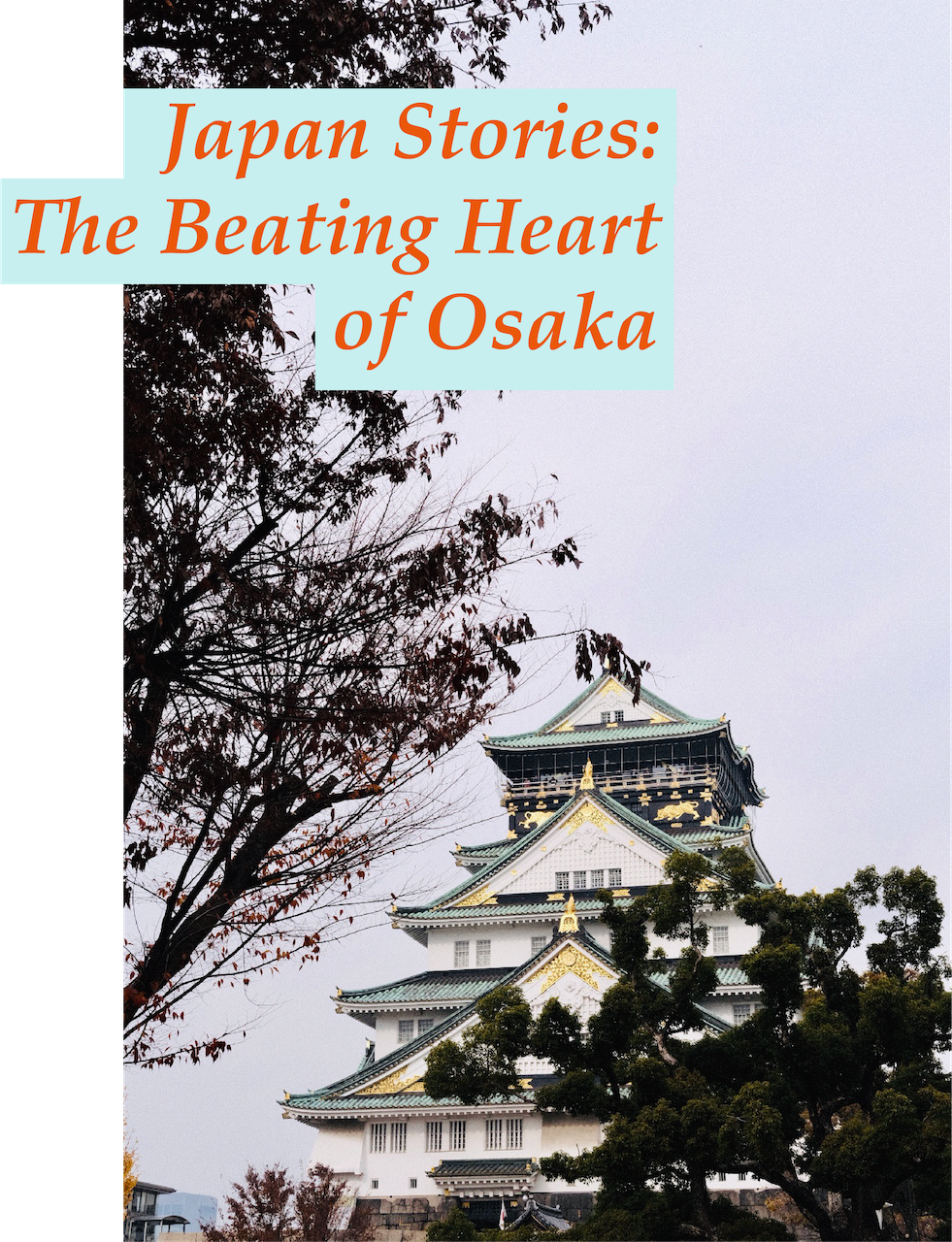 ACROSS THE NEYA RIVER in Osaka’s Kyobashi District, there were no bright lights or cramped promenades, only the sound of a low rider chevy nonchalantly cruising down the quiet road as if with no real destination. On the other side of the river a glimpse of Osaka Castle could be seen through a fleeting layer of fog; a symbol of the city’s imperial history. The fog began to burn off molecule by molecule until the sky turned crisp and blue.

Several moats surround the fortress that’s been the epicenter of many battles fought in the name of ruling all of Japan. The city had been razed to the ground. But out of the fire it has been continuously rebuilt, stronger each time with its own gritty character that differs from Kyoto and Tokyo.

The rivers of Osaka meet and disperse like veins of the body, a roadmap that stems from one central location – the heart. Osaka’s lifeline has always been the sea. I could feel the connection with the city’s past as I walked along one of its many rivers. Steamboats would dominate these passages and bring life, news, sights and sounds, but most importantly, food. It became a major trade hub and as a port city that exported food across Japan and eventually the world, Osaka developed a personality of its own. It became known as the kitchen of the nation. 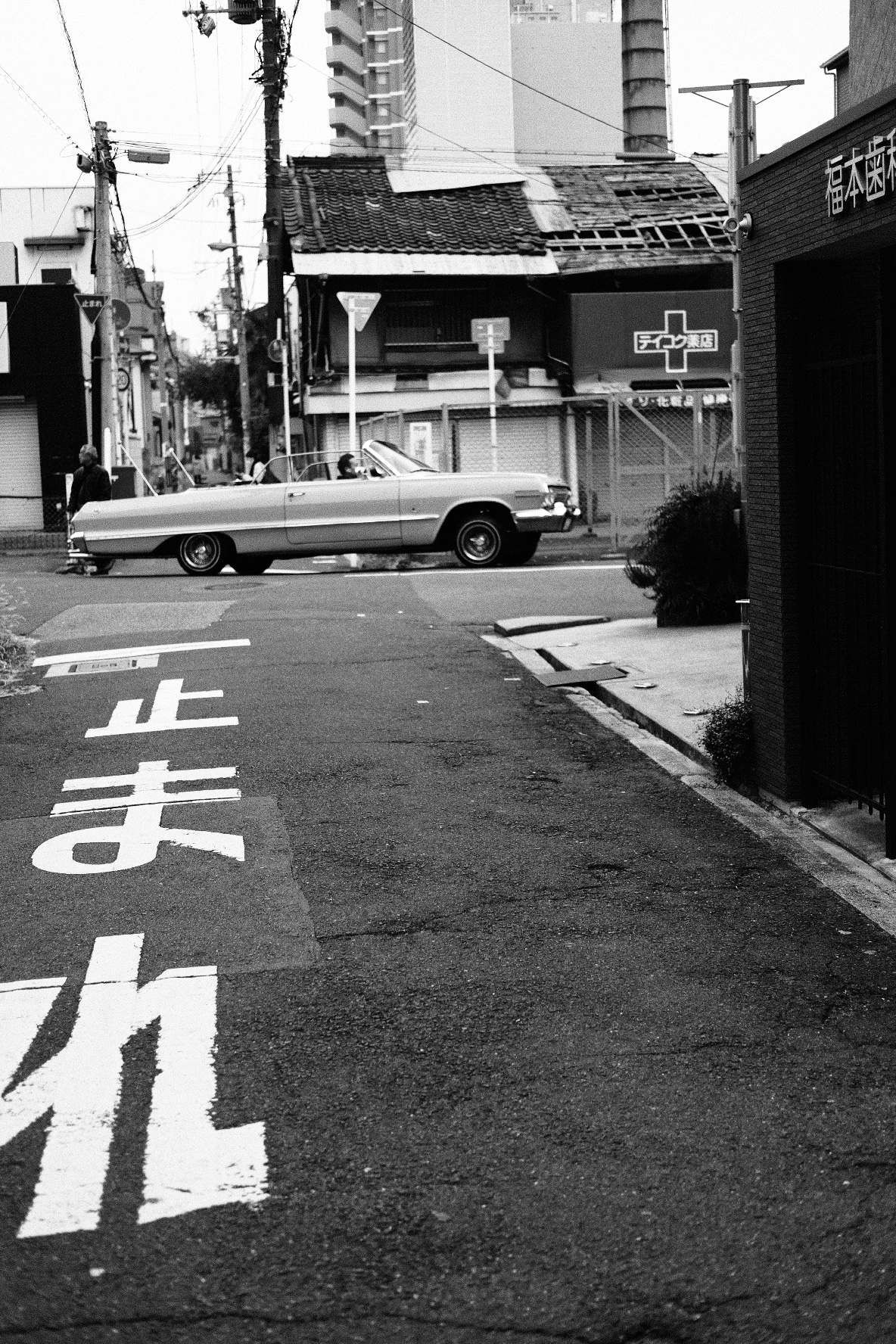 Japanese street food originated here. Its staples of Takoyaki, battered octopus balls, and Okanomayaki, a sort of cabbage seafood grilled pancake, can be world-class and lighthearted all in the same bite. I ventured outside the chaotic city center of Dotonburi with my three hungry companions to visit Izakaya Toyo and the man who embodies the spirit of Osaka.

As we began to explore this working class neighborhood, we came across a family run takoyaki stand on the street corner. A few locals patiently waited in line. The octopus balls were made to order. They would take time and attention to be done right. The line told us we were in the right place. The food on the periphery of Osaka is made for those who call this neighborhood home. Family recipes and ancient techniques create an experience that is crucial to taste the depth of Osaka, a city with a distinct character and charm.

As we turned the corner onto a narrow street not big enough for a car but with room for motorbikes and storefronts, the chatter, the clinking of glasses, and the laughter were unmistakable. Izakaya Toyo isn’t so much a restaurant as an outdoor bar with standing tables set up under an overhanging metal roof. Stacked styrofoam storage crates containing ice for the large beer cooler are off to the side. Toyo mans the open grill with a cigarette teetering from the edge of his mouth. His smile is contagious.

It was Wednesday at 3:30, the middle of the day. We told ourselves Toyo might not even be there; surely he can’t be running the restaurant every single day. As we approached the restaurant massive grins formed on our faces. There he was, laughing with two men who clearly were regulars and knew Toyo, standing by him at the bar in jovial conversation. Tables were already full and drinks were flowing. I dunked half my arm in the cooler and grabbed four frosty beers as we were quickly shown to a table to share with others.

Toyo’s background is inspiring. Coming from an abusive father, it was his dream to create, to start an Izakaya of his own and escape the cruelty of his past. His world crumbled as his father died and he had to sacrifice everything to pay for the funeral. His dedication to family was unwavering, even in his darkest hour. He came out of this adversity stronger, unable to let go of his dream. He created Izakaya Toyo, an unpretentious Izakaya where to this day he creates with his heart on his sleeve. The family he never had are the people he serves and works with daily. 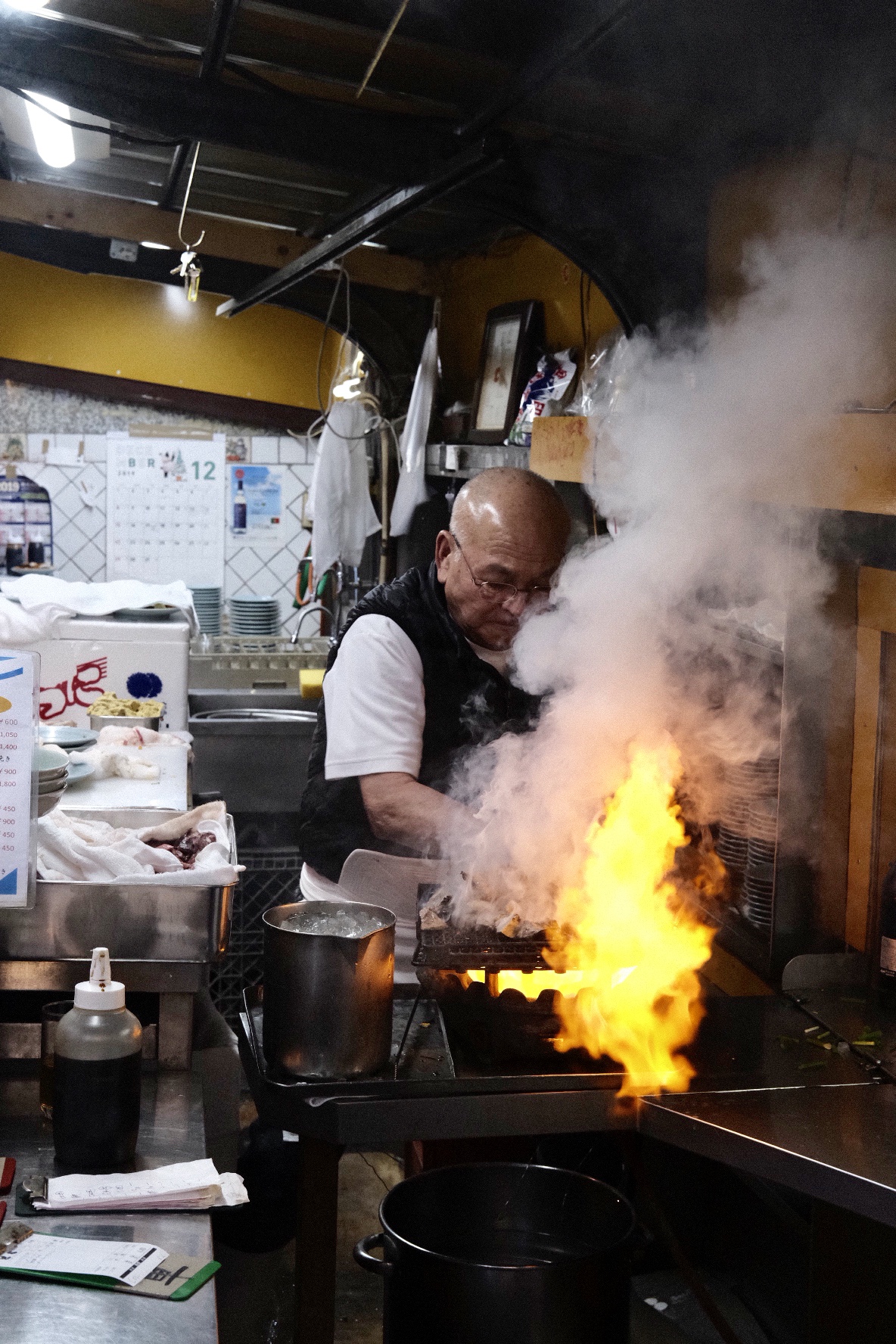 After a few swigs from the small glasses filled with Asahi the first round of food came out. A plate of thick tuna sashimi stacked high, crab tossed with green onion, grilled eel, and a massive portion of uni and roe on rice. The menu is simple; we had to try everything. We were ready for the next round when the blowtorch came out. Toyo began slapping tuna cheek on the grill while using the torch to quickly scorch the meat as he dipped his hand in a bucket of ice water, then into the flame to tend the meat.

There’s nothing else like it. His hand is on fire, the tuna’s on fire, his cigarette is on fire, it’s insane, yet he keeps smiling and checking in on his guests, alternating between swiftly moving the tuna with one hand then dunking it back into the ice water. With his other hand he controls the torch that’s half his size, though he wields the thing like it’s an extension of his arm. This is what he’s known for, creating something hilarious and deeper than just the food.

Japanese cuisine can be thought of as serious when everything must be done in a certain strict way. In places like Tokyo this is often the case. It can be incredibly intimidating. I found myself oftentimes not wanting to do something wrong, make a bad impression, or somehow offend the chef by putting sauce where it shouldn’t be or eating a dish out of order. There were even directions on how to eat the food at times spelled out on a laminated sheet at the bar in front of me. While the food was no doubt always delicious, it does create a formal environment. It’s as if the experience as a whole isn’t to be enjoyed, but instead you must know what you’re doing to be there.

A place like Izakaya Toyo breaks that barrier. Why be intimidated of something that is meant to be shared with love? Eating food and being out with others should make one forget all else and be grateful for the moment. At Izakaya Toyo we could feel that we were sharing the gift of Toyo’s passion.

When we thought Toyo might not even be there at an off hour in the middle of the week, there he was cracking jokes with his buddies, dishing out unbelievable food and creating a memory to cherish. During the meal I noticed the chain link fence which separates Toyo’s restaurant from a quiet cemetery next door. I felt drawn to walk over and peer through to the other side. The sounds around me faded away. Somehow it felt right that these two places were side by side as if Toyo was meant to be there smiling down on the gravestones below, sharing his unyielding joy.

No matter who you are or where you come from, his guests and his city are his family. His heart beats for all of Osaka. 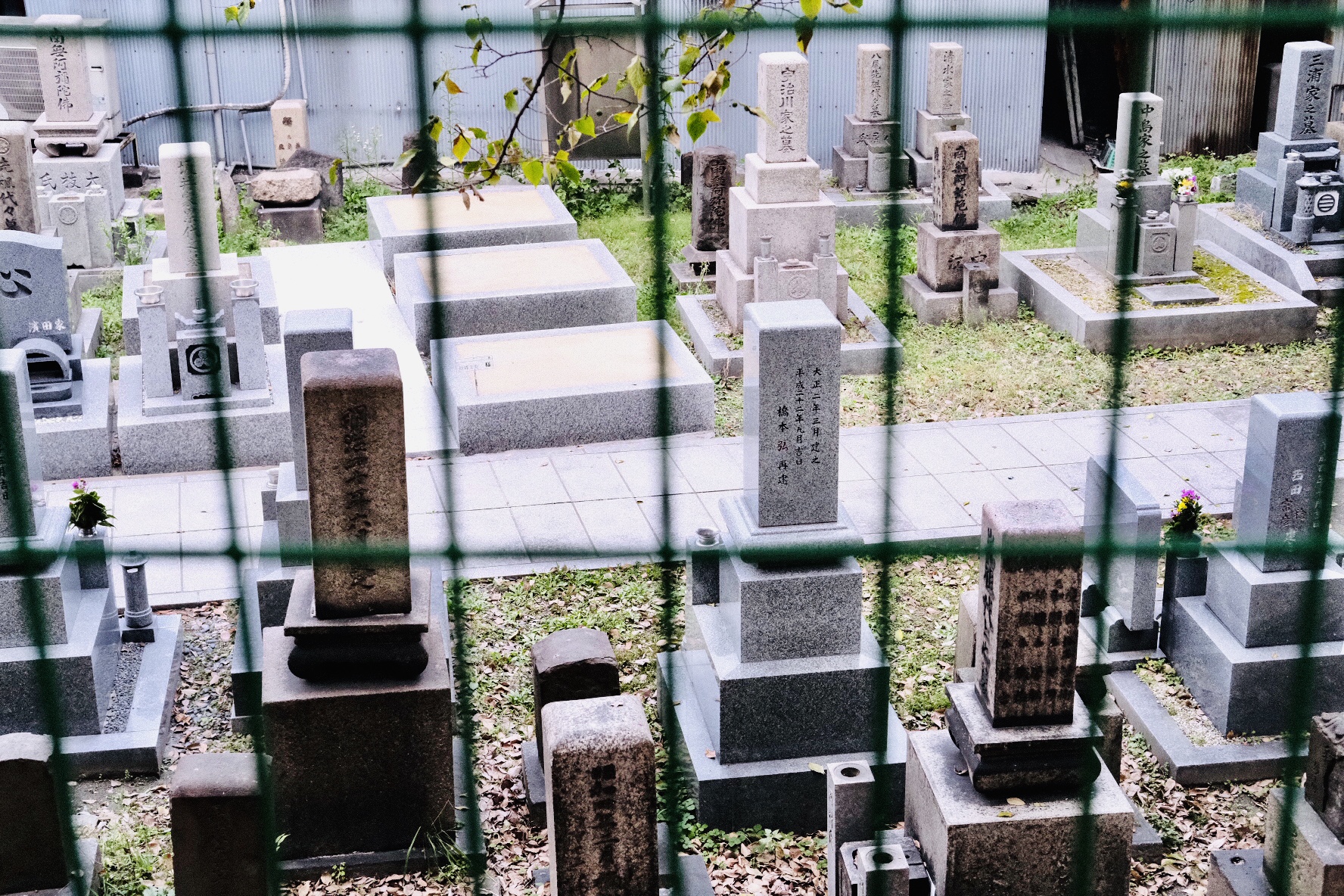