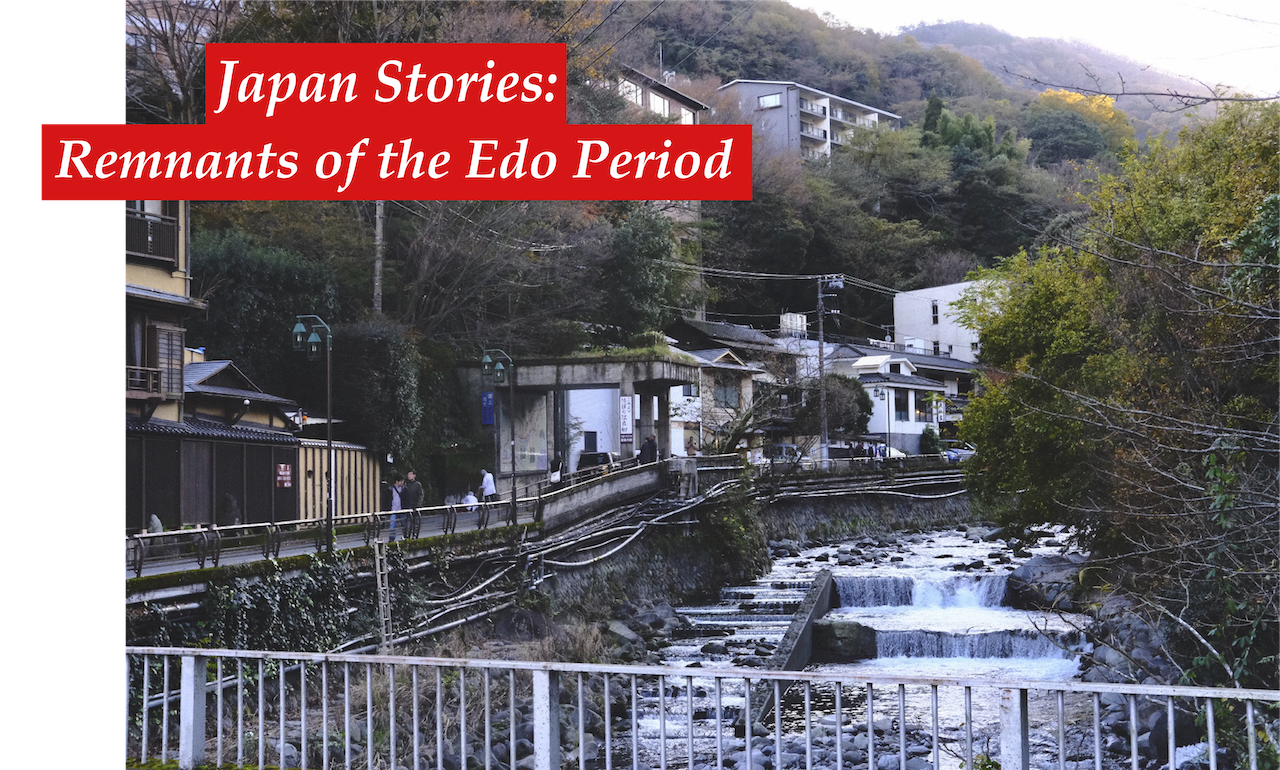 THE BULLET TRAIN IN JAPAN is a marvel of modern transportation. Known as the Shinkansen, if you’re not on it the second it’s planned to depart, you’ll be left behind. My friends and I were headed to Hakone, a region in the hills outside of Tokyo at the base of Mt. Fuji. With about five minutes to make our train from Tokyo Station, we threw together what yen we had and rushed to pick up a few bento boxes — some combination of sushi, tempura and salad — as well as a couple bottles of sake to pass around. This is a must for any proper Shinkansen journey. Once aboard we settled in, the train left right on cue.

Hakone is an onsen refuge from the nonstop pace of Tokyo. It’s where you go to relax, to slow down. I stared out the window and watched the train’s reflection against the glass buildings of the Tokyo outskirts transition to rural farmland. The countryside became a blur as we carved through Japan at an unbelievable speed, gone before I could comprehend what I’d seen. From a city like Tokyo, no destination is inaccessible, giving the country one identity and sense of connectedness.

Mt. Fuji looms on Tokyo’s distant horizon and can rarely be seen through the clouds. We were lucky to catch it on such an unusually clear day, when the clouds and rain had been blown away. Mt. Fuji is breathtaking, always snow capped and with an unearthly, perfect aura. We began to laugh and run over to each other from our seats, simply in awe of this iconic mountain.

Mt. Fuji looms on Tokyo’s distant horizon and can rarely be seen through the clouds. We were lucky to catch it on such an unusually clear day, when the clouds and rain had been blown away. Mt. Fuji is breathtaking, always snow capped and with an unearthly, perfect aura. We began to laugh and run over to each other from our seats, simply in awe of this iconic mountain.

After the Shinkansen and a local train through the hills, we arrived at Hakone Station. Arriving at a rural train station in Japan feels like being in a different era, where train travel is a new and exciting, the beginning of an adventure. We pulled into the station in the early afternoon, the train came to a screeching halt. The cunductor waved us in with his white gloves, then quickly ushered us off. We grabbed our bags and began the hike through town, passing the few open shops on the main road selling dried fish of all kinds, homemade soba noodles and red bean mochi.

A group huddled around two small open grills in front of a store selling fish, a container of bite sized fish and chopsticks off to on one side of them. The local fish was free to sample, though we didn’t know what kind it was. We each took a piece and watched it char on the grill while sipping a cup of light soup. The fish was tasty, we smiled and laughed with a few of the lingering locals who walked us through the process, our first taste of Hakone. We continued up the hill.

Hakone is an onsen town filled with natural Japanese hotsprings. There’s no better way to unwind after a day of exploring this diverse and historic region. We’d be doing the Hakone loop the next day, a trek that would take us up further into the hills by bus, by gondola into the mountains across a sulphuric mine, by cable car down to Lake Ashi, by boat across the lake where we’d hike along the Old Tōkaidō Road, and by bus back down.

It was an expedition, so tonight we’d relax in our hostel’s onsen after finding some dinner in town. As we stepped through the dark frayed curtain of a local Izakaya, we were greeted by a woman and single chef behind the bar. It was early for dinner, so luckily it was empty. We had enough people to fill the bar and the low chabudai table ourselves. The chef prepared and cooked for the entire restaurant while the woman took and served all orders. We settled in with a few rounds of sake and appreciated each item as they were presented, slowly and carefully, as if there was no place else to be. 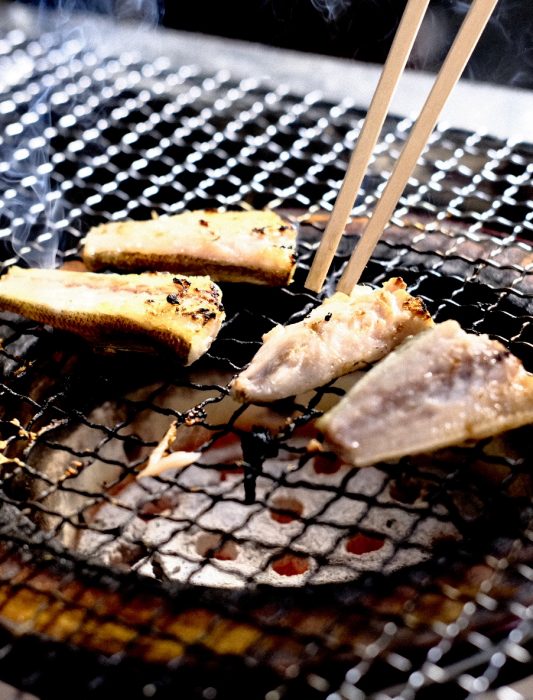 The next morning we were on the bus headed to Gora, the next town up in the hills. Winding along the mountain roads lined with beautiful trees of deep amber red, burnt orange and evergreen, we arrived at Gora. It was still early, the air was crisp and clear, getting colder the higher we’d climb. We found a green tea vending machine and boarded the next bus for Owakudani, from there a gondola would take us across the sulphuric mines overlooking Lake Ashi.

Smoke emanated from the mines below us like a western town that had been blown to bits. The smell of sulphur hovered in the air. When we arrived at the top of the mountain before heading down to the lake, we were to try what this particular stop on the loop is known for, black sulphuric eggs. Dipped into the sulphur mines and known to add years to ones life, we had to try these jet black eggs. Anything sounded appetizing, we didn’t have anything for breakfast besides the green tea and were starving. We all bought a bag of several eggs and cracked them open on a few scattered rocks. Something felt right about this, primal in a way. Steam radiated off the piping hot eggs as we opened them up, taking in the view of Fuji-San in in the distance.

Once down at Lake Ashi, we traveled across the lake to Hakone-Machi, a lake town which served as a critical checkpoint on the Old Tōkaidō Road. This fuedal highway linked Edo, modern day Tokyo, and the imperial capital of Kyoto during the Edo Period (1603–1868). 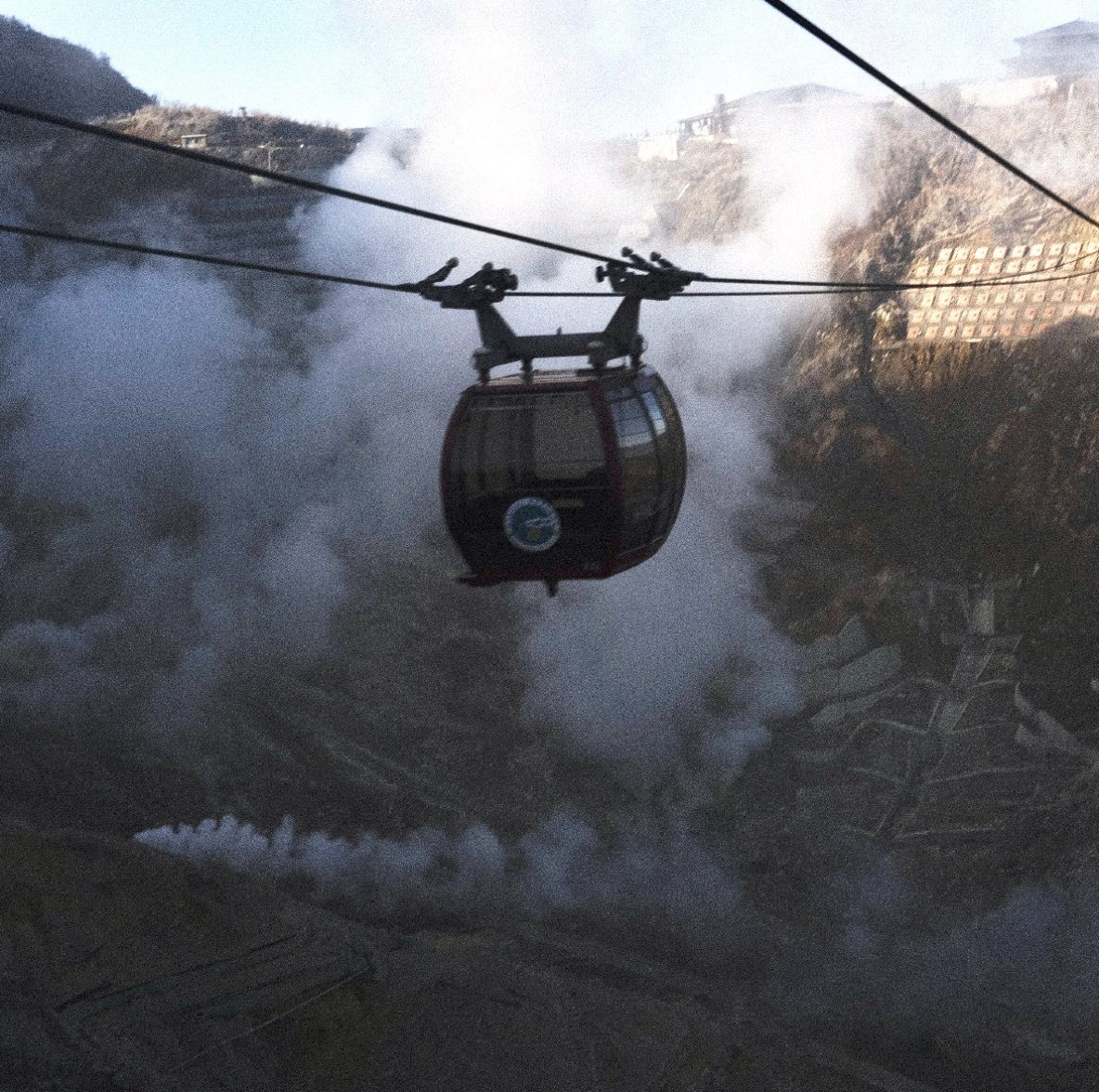 We tried to find any restaurant that was open early. Off the main drag was a noodle house where we devoured chilled soba noodles and hot Japanese curry. We continued until we reached the Hakone checkpoint, a recreation of what was so important to the safety of the capital city of Japan hundreds of years ago.

The checkpoint was created exactly as it was in the 1600’s, with a gate, fence, replica housing for officers and soldiers, a prison, and a lookout tower. We were shown around by an incredibly enthusiastic guide, making sure we’d stop to fully comprehend each meticulously recreated scene. Hawks circled overhead as we climbed the steep stone steps to the lookout tower, taking in the view of Mt. Fuji and the fishing boats occupying Lake Ashi below. We followed a path through dense oak trees circumventing the lake, where across the water we could see the red torii gate of the Hakone Shrine. 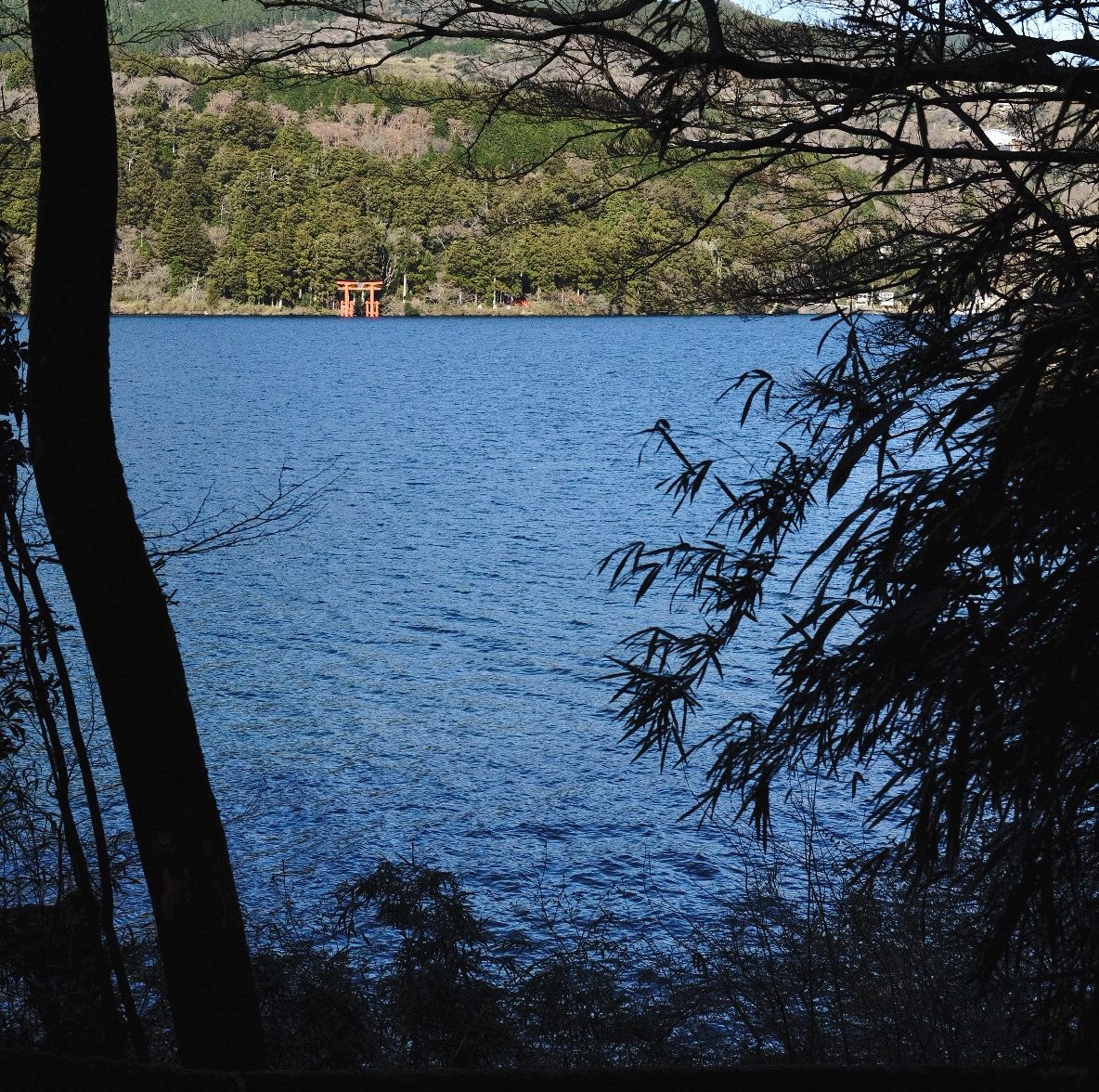 At times it felt like being in the Sierra Nevada’s, somewhere recognizable to me and the geography where I was raised. There wasn’t a sound around but the crunching of leaves beneath my feet, I felt at peace. But that torii gate holds meaning, seeing it from across the lake I became aware of where I was on the other side of the world, breathing the air that replenished the souls of ancient samurai.

We continued hiking until we reached a stone path in the hills, the remaining original route of the Old Tōkaidō Highway. This Eastern sea route was the most important of the five routes connecting Kyoto to Edo, where the Shogun held his power.

We followed the beautiful trail through the woods several miles to reach the Amazake Chaya, a traditional tea house from the feudal era. We walked along the Tōkaidō into the hills, the fresh air invigorating, thousand year old trees towering over our steps.

We passed around some sake and tried to imagine life as it was back then with traveling papers in hand, doing anything to stay alive, avoid bandits, simply make it through this treacherous pass.

The 19th century artist Hiroshige depicts the pilgrimage in his series, The Fifty-three Stations of the Tōkaidō. I’d grown up loving this type of art, the woodblock style, the way it depicts the natural world. Not previously knowing this was Hakone, his 10th Station of the Tōkaidō was always one of my favorite paintings. The pilgrims traversing the craggy, colorful steep hills, with Mt. Fuji subtilely in the distance. Now I was here on the original Tōkaidō with my friends, my companions, experiencing life as feudal traveler. 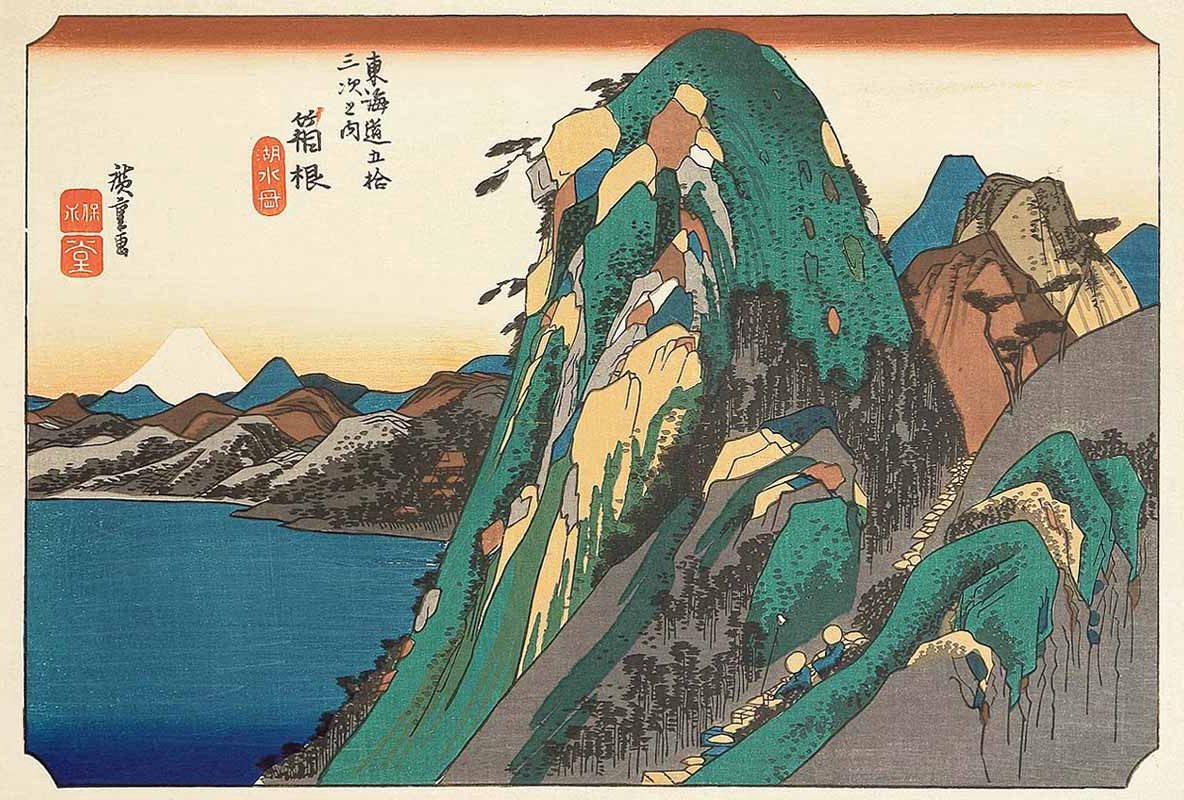 We picked up our pace as the temperature dropped, hoping to reach the Amazake Chaya soon. The old tea house served hot rice wine to travelers of the Old Tōkaidō Highway and still does to this day. With the sake finished, we were in need of something warm. We arrived at the tea house right off the Tōkaidō as the sun began to set, a farmhouse with a straw thatched roof and no sign of life from the outside.

As we opened the heavy door however, the smell of burning wood and something sweet engulfed us. The warmth drew us in, it was dim, the smell so intoxicating. We were greeted by two Japanese women with an irrashamaise! and shown to low, irregular wooden tables with no center. The floor was mud, and deep in the room was a Japanese Irori, an open hearth, used to heat the room and cook.

I took a stab at ordering in Japanese and the woman who ran the tea house applauded my attempt, urging me to order entirely in Japanese. After a few failed attempts I realized she wasn’t going to let me revert to English. I persevered and ordered the amazake tea, a variety of sesame seed mochi and miso soup with konjac, a sort of taro noodle. We sipped the sweet rice tea and I couldn’t help but think of life as a traveler, a day of hiking this arduous highway to be greeted by a sanctuary such as this. Amakaze is incredibly nourishing, it heals the body and the mind, it’s what we needed.

The sun was now set and we huddled together for warmth on the road outside, waiting for the bus that would take us home. Back at basecamp we relaxed in the onsen and reflected on the experience we just had, what this town meant to all of Japan hundreds of years ago. The stars shimmered above us as they did back then, yet the world has changed. But the spirit of this region, the history and mysticism of its waters, that has remained unchanged.