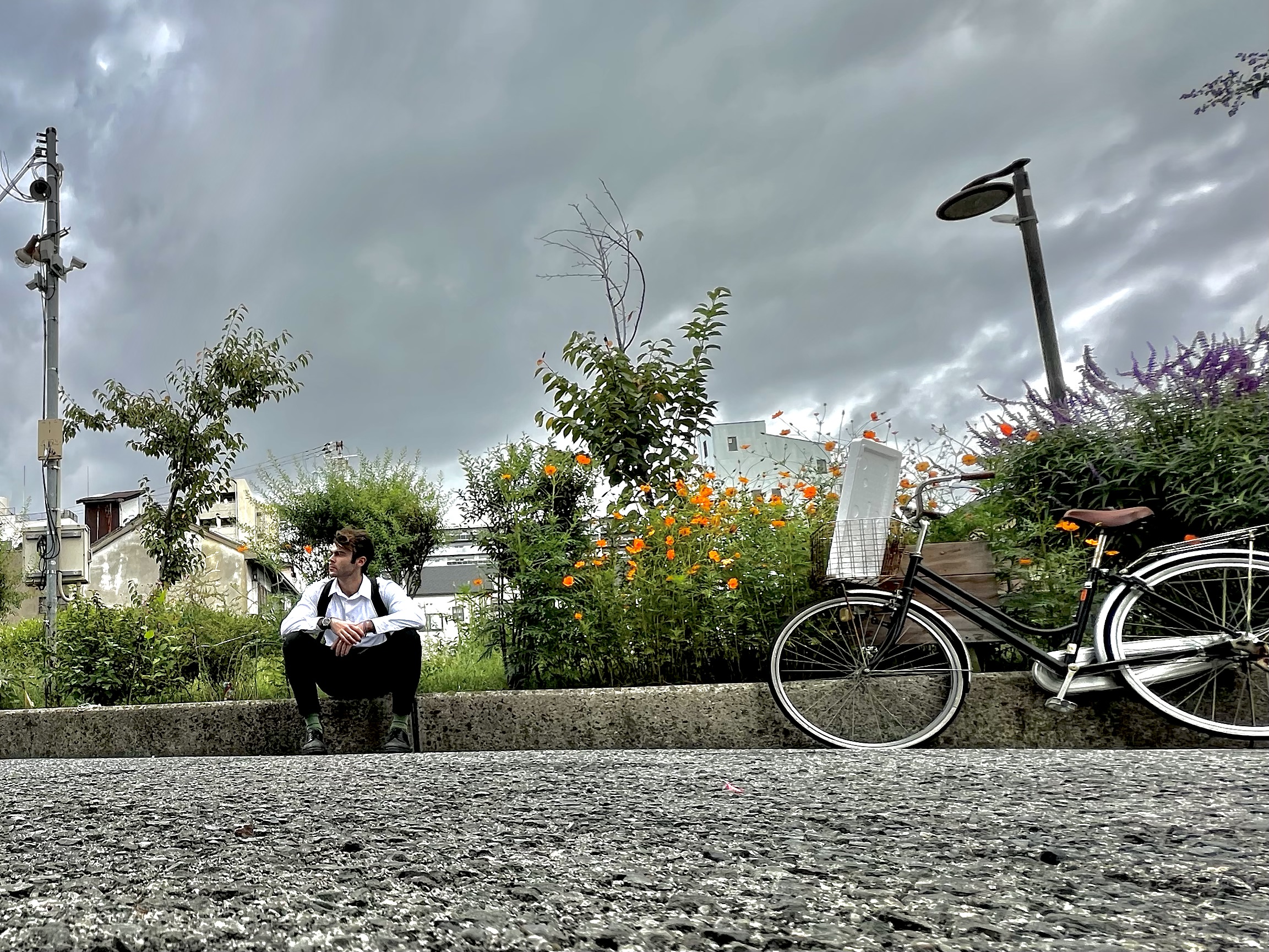 11 Oct It’s You, Which Makes the Flowers Bloom

THE SKY IS COLD, silver, and melds with the power lines and train station. I stroll around the neighborhood before work begins.

I stop when I notice roses hanging over a dark green rusted fence. The flowers are light pink, red like sodden wood, white. Their fallen petals cover the asphalt below my feet. They grow through and around the fence, naturally and of their own volition.

They don’t impress on the lawn of an old, distinguished manor. These roses seem forgotten. They’ve taken on a life of their own, composed their art with what they’ve been given.

The colors of the roses add wonder to this feeble green fence. It’s unkempt, wild, and this is what catches my eye — the spirited cluster of roses on the outskirts of a city.

As a new English teacher, I’m subbing four out of five days a week. Some days I’ll travel to teach in Kyoto or Kobe, which is pretty damn cool. Other days I’ll stay closer to home near the bustling Tennoji area of Osaka.

But mostly, so far, I’m spending days in pockets of Osaka’s proximity which feel like outpost towns in an old Western — those which comprise a general store, a train station, a few places to eat, a bar.

Kishiwada is one of those places, about an hour south of Osaka.

These hubs seem burnished from the rain, and unlike areas closer to the city center, they’re quiet, save the sound of wheels gliding on the railway, coming and going throughout the day.

I enjoy these sorts of days. I could be anywhere, but here I am in an area that’s not on any must-see list of Japan, nor is it likely on any traveler’s radar.

I’m living. I’m experiencing. I’m existing in a country that was once just a dream.

This sort of place is a proxy for any town across the globe where people live and work and go out to lunch on a Sunday afternoon. It’s easy to wonder, “what am I doing here?” Yet can’t we ask that at any time, any place?

When we’re in the action, or at least somewhere we want to be, it feels different. If we’re somewhere important, perhaps, we feel important. I made it to New York, LA, Paris, Tokyo.

But it’s not so much the place we’re in physically as the space we inhabit mentally, spiritually.

Where we are in the world inspires something within, or it doesn’t. That means something. It means, perhaps, that we should make a change. Go somewhere new physically. Dare to change where we are mentally.

Because this sort of place where nothing really happens — that is, except people living; trains coming and going; the moon rising and falling; babies born and raised and cared for; relationships began, developed, perhaps severed, or maybe nurtured like a garden, which matures and brings a different sort of meaning through every stage; memories crafted and stowed away like jewels to one day open in a treasure chest*; seasons had and gone — this sort of place is beautiful in its own right.

Not only is it beautiful — it’s vital.

It’s not only the neon-lit skyscrapers of Osaka and Tokyo which are touched by the rays of the sun. It’s places like this, where magic exists in every roadside flower, each mom and pop izakaya, and even the small English school.

Don’t be late. It’s been drilled into us new teachers, as punctuality is paramount in Japan.

Yesterday, I had to make a mad dash through a new town in the rain to beat the clock. Quite the sight! Today I came to Kishiwada with ample time.

I pass the roses and further along, come across a row of flowers which burst with orange and purple color. The sky is dark. The surroundings are industrial. Few places in the world remain full of light, color, sun.

Yet it’s the darkness which makes the vivid colors leap from the world into my perception.

Our lives aren’t always sunny, either. In more places than not, the world is rather bleak. But then, you come to a place like this, and there are flowers here, too.

Flowers that make you think about beauty in a different sort of way, for they ask you to see the color in a world so often grey.

Flowers which grow. Which live with all the color they can muster. Which die. The colors of the flowers lift me.

Do we see the world, or does the world see us? What does it see. That choice is ours.

What spirit do the flowers feel as I saunter down the road; am I adding love to this world in the way that only I can? That’s something worth endeavoring to answer.

Does my vibration make this small town better for my drifting through? Does my smile reverberate.

We can’t determine what’ll happen to us in this life, but we can determine how we show up.

Your spirit, that’s all you have with certainty. We’re not the things which we amass. Not the money we accumulate or our title. We’re not, especially, what other complex, hurt, souls who are trying, too, see us as. We are who we are and who we want to be.

When the world can take everything, your spirit it can never take; keep your head up. It’s the fighter in you who sees each day as lovely, despite the pain, the weight, the noise. You can overcome all of that.

It’s easier to say fuck it all. A meaningful life doesn’t come from doing what’s easy.

There’s your purpose, bursting from that flower on the outskirts of town. It’s you, which makes the flowers bloom.

*Got this idea from a recent episode of the Aubrey Marcus Podcast, and I thought it was wonderful. The episode is killer, as well.