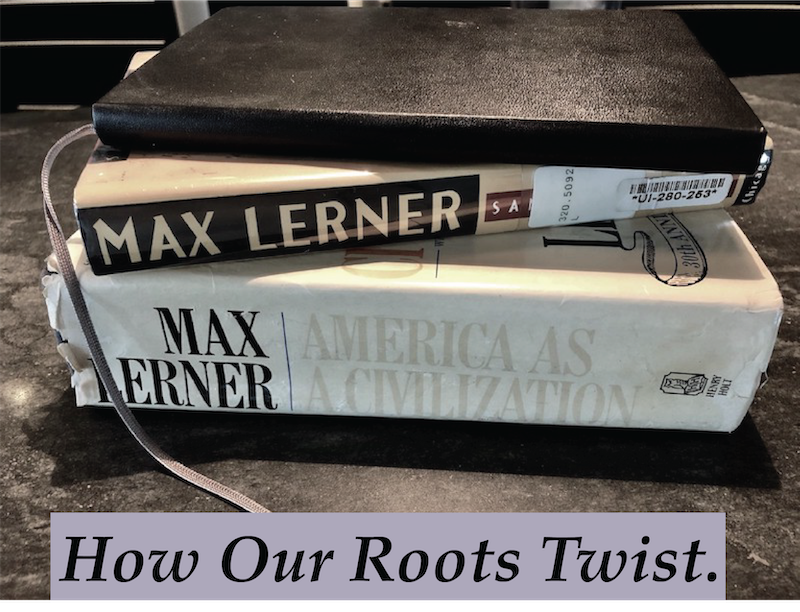 21 Nov How Our Roots Twist.

IT’S AMAZING TO LOOK back at the ones who came before me on my family tree. From my Dutch Italian roots on my father’s side to my Russian Jewish beginnings on my mother’s half, I’ve learned an incredible amount about my history from the stories and first hand accounts of who these characters were.

While there were cultural differences between each heritage, the folks that came from each shared many of the same passions and traits that made them extraordinary people. The older I get, the greater my interests are in the past generations of my family — how they lived and the hardships they endured as immigrants in the early 20th century. As a kid when I would hear stories about them, it wasn’t much more than an entertaining tale. I couldn’t feel a realistic connection to family as far back as great-grandparents. Grandparents were all I could wrap my head around.

As I hear their stories as a young adult, I have a more vivid idea of who these men were. I can see them not as characters from a story but as a part of me, my own blood over a hundred years ago. I can imagine my great grandfather combing the frozen New York City streets, looking for work.

My great-grandfathers both set sail to the new world as children and landed in New York City, one calling Holland home before coming to America, the other Russia. They sought out a better life through tenacious learning and never limiting their abilities. Many of the questions I ask myself about growing up, building a career and finding my place in the world can be answered just by looking back at their incredible journeys.

As a young adult societal pressures begin to seriously build. It’s as though an hourglass is flipped and the sand begins to fall, counting down the time left to create meaning in life. I try to focus on what’s important by taking each day slowly and looking at the big picture, but naturally that intimidation is there. We all feel it.I often ask questions such as am I wasting my time at this job if I don’t like it, or am I doing enough to get ahead.

While reading Rich Dad Poor Dad by Robert Kiyosaki, I came across a chapter which sums up one of my greatest concerns. More importantly, it brought to mind one of those life defining experiences of my grandfather Dicky who’s father was an immigrant from Holland. This is a story my grandmother tells me and my brother repeatedly as one of her greatest memories of his character. He had the humility to know the difference between his profession and his business.

My grandfather Dick Van Patten was a child actor on Broadway. He had an energy, a light that shined from within him. He was impossible not to love. At one point as an actor he was completely out of work and could barely provide for my grandma, my dad and his brothers. He knew he had to do something different. He went to the local real estate firm and asked for a job.

He relished the opportunity, studied the ins and outs of the job and became the best that he could. My grandma tells the story of him laughing hysterically one night, waking her up. “I just thought of the perfect house for the Joneses!” He laughed. My grandfather loved it. His acting career would eventually pick up again and he became what he was known for. However, those years in real estate gave his spirit life again. He knew he couldn’t limit himself to simply acting. Acting was his profession, but it didn’t define him as a person.

Your business is your entire being. It’s the makeup of your soul, with your passions, qualities and ambitions all feeding into it daily. Just as it is important to invest in your profession, it is crucial to invest in your self growth. My grandpa chose a new job that was uncomfortable at first, but contributed to his progress as a complete human being. He learned skills in sales that got him back on his feet in acting. Everything we do is connected, and when we feel one aspect of our life beginning to slip away, there’s a possibility that it’s our heart opening up to something new.

Many people believe they are defined one-dimensionally by their profession. If you write, you’re a writer, if you build houses, you’re an architect. This is all some people strive for, a career which becomes their being of existence. It’s what we dedicate at least four years of our lives to in college, specializing in a field so we’ll be prepared for the workforce immediately after. I see life differently, as I believe my grandparents and great-grandparents did too.

While I would love to find a profession I feel so passionately about that I give it one-hundred-percent of my life, that isn’t always realistic. I want to continue to seek fulfilling work that doesn’t close off the rest of my life, but rather adds to my personal business.

Every professional field is a new wealth of knowledge waiting to be utilized. The only ones holding us back from tapping into them are ourselves. All subjects are related and must work together in harmony, just as the farthest reaches of nature affect each other and keep the Earth turning.

I’m trying to expand my mind as much as possible by delving deeper into what interests me and never counting myself out from a job because I don’t think I’m made for it. We can all develop to learn anything. The hardest part is simply starting over at something new and having no shame in asking the small questions that may seem trivial to others. The answers aren’t always so obvious.

I see myself sticking with my new job for a while because it’s fascinating. I’m learning brand new skills which can only serve to benefit me. I don’t see myself as one dimensional. Nobody is. We’re complete human beings. At this stage all I want to do is keep learning. I think that’s something I get from my great-grandfather Max Lerner.

Reading his biography has blown me away. He appeared so prestigious from the stories I heard as a kid, a small man in size but a mind that was greater than life. As I navigate bumps on my personal journey and wonder where to look for answers, I read his book, and the light seems to find me. I see him as simply human, a man who wondered in the same ways I do today.

Before his family came to America, Max’s father took on a new last name to avoid military service in Russia. They were Jewish. His family changed their name from Ranes to Lerner. In Yiddish, a Lerner is someone who cares about learning. Max was a brilliant man. A columnist in many publications of the 1900’s including the New York Post, an influential writer, an outspoken public opinion, and a beloved college professor.

In his later years when suffering with serious illness he explained why he didn’t want to die.

“I didn’t want to die because I felt I still had a lot of possibilities ahead, even in my eighties,” he wrote.

Life tries to fit us into a box enough as it is. Both sides of my family believed in breaking down the walls and weren’t afraid to seize the moments life presented. They created their own luck and trusted the beauty of the world. There’s much to learn from simply looking back.