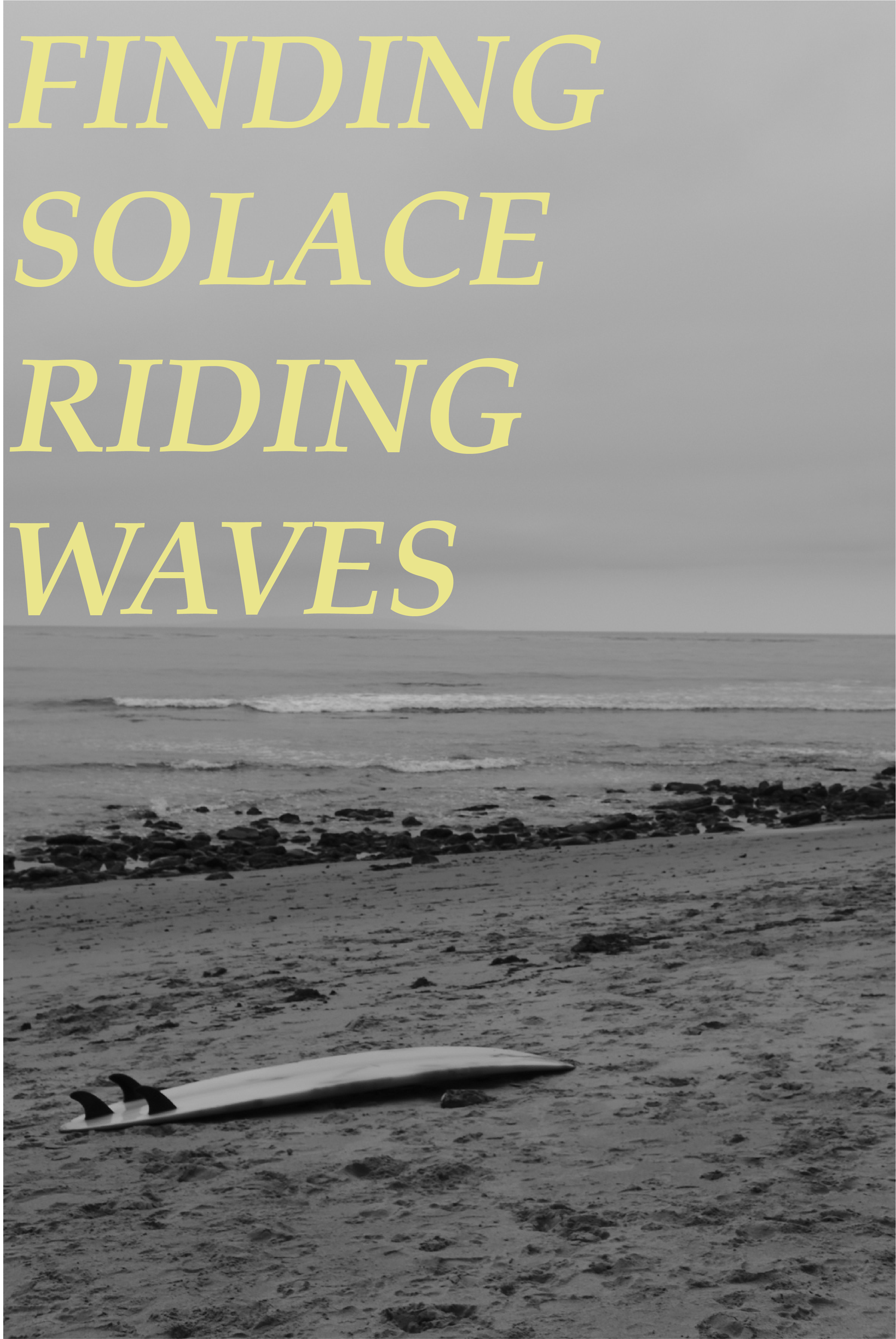 IT WOULD HAVE BEEN INCREDIBLY EASY to stay under the warm covers and continue sleeping. The early morning assuaged any thoughts of stress—if the earth was this peaceful, this natural, then I too should be.

In a half-daze, my brother and I navigated our way through the dark, packed the car, and left.

With the windows down, the cold morning air mixed with the car’s ingrained smell of bubblegum surf wax. The comforting smell filled me with thoughts of childhood; these were the days I loved.

When the darkness transitioned to dawn, the world appeared as if through a translucent film. The moon was still illuminated and alien, not yet imperceptible by the essence of day, when the sun would have its time.

“Any idea of how the waves are?” I asked my older brother, Duke.

Fighting to stay awake, Duke fixed his gaze out of the window as the cool breeze swept through the car. A marine layer hovered on top of the oncoming road.

The heat permeated through the car vents and toasted our chests. The fresh air, still drizzly from last night’s rain, was too nourishing to keep the windows up. The raspy radio played indiscernibly in the background. It was a voice, a song? No, it was a radio show. How could anyone be thinking clearly enough to host a show right now?

“I think there may be some decent size, nothing you can’t handle,” Duke said, cracking a smile.

We pulled up as he turned the wheel and switched the car into reverse. He backed into a spot close by the gate.

“Let’s do it,” he said as he put the dusty blue Durango in park. It squeaked to a halt.

As we got out of the car, I opened my door into a damp green bush. Drops of water fell from the tips of the plants onto my shoulders—tiny microcosms of life. I inhaled the rich ocean air deeply into my lungs. I loved this time more than anything; the odd few hours between sleep and normality felt supplemental to the oncoming day.

It was like living as a page turned, neither on the last nor the next one; we were nowhere, on a different plane of existence.

Flowers and succulents lined the gravel road that we’ve been coming to since we were little. The smell of aloe floated in the air; the flowers glistened, fresh and alive from the rain. I grabbed my weathered wetsuit with the zeal of a high-schooler. I used to meet my group of friends practically every single day of summer to head down to the sliver of the beach we likened to paradise.

The car continued: beep, beep, beep — until Duke closed the door. He slipped off his hood and revealed a mane of shaggy hair.

“You have everything?” Duke asked, holding his shortboard under his arm as he slung his wetsuit over the front.

“All set my friend,” I said as I grabbed my longboard, its color yellow from years in the sun.

Putting a surfboard under my arm gave me a sincere joy; surfing requires a presence. One’s mind wanders in the water — it is a place to think. There’s nothing to do but lay on the board and be in that moment until the next wave comes.

I looked up at the dark cloudy sky. Take this in, I thought. Really be here, this is what life is all about. I inhaled again and closed my eyes. I couldn’t get enough of the smell of the brisk ocean air, nor the feeling of gravel under my bare feet. The street felt like standing on petrified lava rock. This feeling, this would never get old.

Duke had caught a solid first wave and paddled back out to the break. With each stroke, he took a handful of cold, clean water, and pushed hard behind him. As kids, he would tell me how good the rhythm of each stroke felt:

To work the shoulders and core, to connect with the physical planet, to feel the invigorating saltwater cling to his face and hair.

“Aren’t you gonna miss this!” Duke shouted at me with an innocent smile. He raised his voice to be heard over the pull and sway of the sloshing water.

Hell ya, I’ll miss this, I thought.

“What, you getting waves and me watching?” I said as I grabbed some water and pulled it through my still dry hair. “I honestly think this is one of the greatest beaches in the world,” I said. “We might as well be in Italy or Portugal.” I looked back towards the beach and the overhanging cliffs. Late in the day, they covered the beach in shadows like a blanket.

“Go on this, big guy!” Duke shouted, flicking his chin towards the expanding ocean to signify the wave approaching my turned back.

I spun my board around and got into position. I began to paddle vigorously, then softly and nuanced to set myself up for the perfect take-off.

I felt the force of the wave take control. I popped up, a bit shaky. I soon found my footing and cruised down the line. The wave was like a sling-shot; It propelled me towards the shallow reef and the beach as the water glided over my feet. Five, six, seven seconds… that’s all it is. During that time, it felt as though this is what matters in the world — this primitive feeling, this is good.

The wave lost its power and died out; I dove into the water headfirst. It was refreshing to go under like a seal, the water now colder than the warming air.

The sun rose higher in the sky and made itself known. I stayed submerged for a few moments, holding my breath. I looked up through the thin layer which separates our world from the unknown — the sea, with its mystery and unexplored depths — I broke through the veil of reality.

I floated for a moment to let gravity fade into nonexistence. An alien world, I thought. I tested how long I could stay below the surface. If I had the strength, I’d stay under. It took more courage to rise back up.

“How was that one?” Duke shouted from the lineup. His hands swayed back and forth through the water, keeping him stationary like a buoy.

“Fun one!” I called back. “It took a second to get my sea legs under me, though.”

Duke had the confidence knowing any time he got back out to surf, it would be simple. He could navigate the wave to do whatever his mind asked of him. He didn’t have to think. Like any great athlete, my brother just did.

I pulled up alongside Duke without saying anything, both appreciative of taking in the energy of the natural world. The sea is healing — the cold water is restorative. I fastened my gaze on the horizon, considering my next words. Say it, I thought. Say it.

“I’m gonna miss you, man, a lot,” I said, my words backed by the entirety of my heart. “I’m gonna miss this. I wish we’d surfed together more often.” I looked out into the deep sea; out there is the unknown, the horizon is all that could be seen. Perhaps, that’s only what we’re capable of perceiving.

The horizon continues the further one reaches. It goes on and on until we look back and don’t recognize where we started. With each reach, we travel further from our memories — yet, like home, they’re always with us.

Duke smiled and turned to face me.

“I’m gonna miss you too bro, we all will! ” he said. We sat in the silence for a moment, listening to the lulling voice of the water.

“But if you feel like you have to go, then go,” he said. “It’s your life, and nobody else’s. Everybody will always have an opinion. They will try to tell you what’s right and wrong, but when it comes down to it, you gotta follow what’s in your heart. What else matters?”

I hadn’t heard my brother say that. It felt like the last grip holding me back let go and finally released. I felt heat welling up in my face and immediately cupped my hands to splash it with cold water. It tasted like seaweed and brine. It tasted like the wild.

“Damn, you don’t know how much that means to me,” I said, looking down at my board. Like the sea, these words nourished my soul. “I feel like there’s this pressure to be successful, in the way that society considers successful, you know?” I said. “But what does it mean? I wonder what really brings joy and contentment.”

I felt conviction in my voice. This was something that consumed my thoughts daily.

“You have to find out what happiness means to you,” Duke said. “I’m searching for it as much as you, we all are!”

“Being out here makes me genuinely happy,” I said with a chuckle. Although I really meant it.

“Me too, man,” Duke said, shaking his head. We were both having fun, like kids. “But what if we could just be at peace no matter our circumstances, knowing we’re exactly where we’re supposed to be?” Duke said.

“If we could achieve that, then damn, we’re doing something right. Obviously, it isn’t easy. But what we think we want, often doesn’t even make us happy… I think happiness is a state of mind. It can’t solely come from what we’re doing or where we are. It comes from being present, literally just being amazed at life and grateful…”

A languid wave rolled under us, but we stayed still. The sun had risen and hit our faces; the salt began to dry on our skin. What is it about the calm of the ocean that makes it feel like an answer to life’s questions? I thought. Surfing brought my brother and me together since we were young — we could have been in the year 20, or in the year 1520, still doing precisely this, discussing life amid change. Surfing is simple — it puts life into perspective.

“We get caught up with what others think, but if we could let that go?” Duke said. “That’s true liberation! What others think of us, what they think of our plans, and how we’re living our life; none of that matters.”

I sat listening, truly listening. In a way, we needed to be out here to have this talk. Unintentionally, the ocean was our safe place; the freedom we found here provided the inspiration for our hearts to speak. I needed the validation from my brother, I wanted him to see me off, to be happy for me and the choice I was making. I was leaving home.

“I think you know in your heart if you’re doing the right thing,” Duke said. He was the voice of reason. “Whatever you do, it should make you proud to be you, and nobody else.”

We looked at each other and didn’t have to say much more. We knew we were on the same team — it took an entire childhood to figure that one out. Like time, the ocean heals. I had always felt grounded in the water, the way it makes me feel small and meaningless. I found the strength to deal with anything when listening to the building and crashing of the waves. It was the heartbeat of the planet.

This would forever be home. The sea would take me in, without asking why.