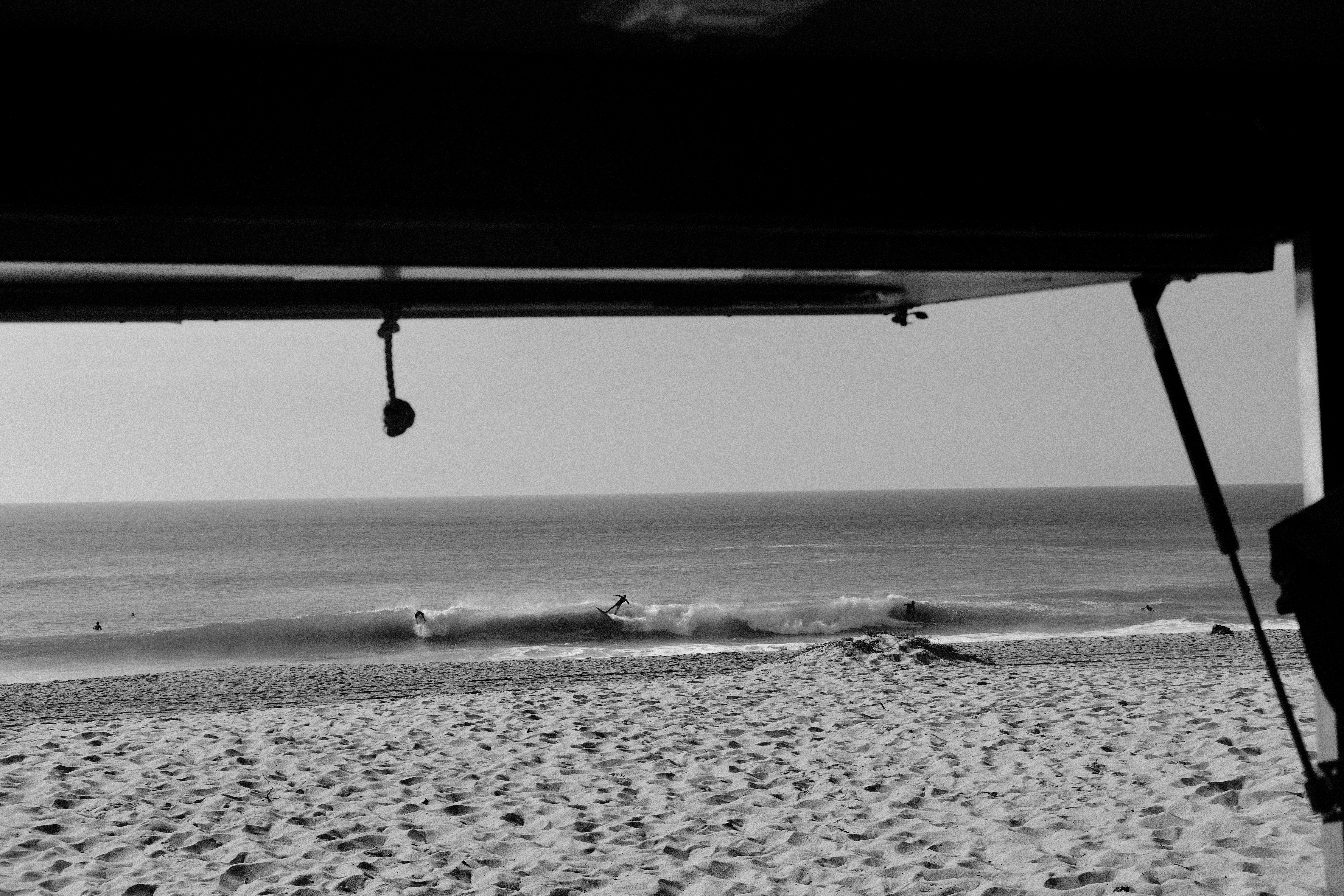 THERE’S A DIFFERENCE between being a surfer, and somebody who surfs. Somebody who surfs has taken up the activity; they might go on the weekends once they get the bug, or before work early in the morning.

This feels like a sort of rebellion from the day, a respite from the grind of getting up and doing something not entirely for the mere pleasure of it, but because it’s expected, part of our society, a part of being human. We get up, and we contribute.

Surfing is for the individual.

To be “a surfer” means you’ve adopted the role, the look, the sound of one who spends time around the beach over four times a week. But perhaps to be a surfer as opposed to one who surfs is to lose the sheer stoke of being one who surfs in the first place. There’s nothing wrong with being somebody who surfs; I’d put myself in this category.

To be one who surfs is to know there’s something about the world, something out there that transcends merely going through the motions, something joyful, exhilarating, challenging and damn worth trying again and again, despite the red scratches and bruises which accrue on one’s feet after walking atop sharp and irregular stones submerged beneath the ocean’s crest.

These are the signs; bloodied feet and gleaming smiles.

To surf, at its essence, is to play. At least for a moment, to surf is to let yourself play. You are no longer a boss or an employee or a dad or a daughter, but somebody just trying to figure out how to balance on an oblong, heavy, and slippery object that glides through the ocean water like an airplane wing through a heavy rain cloud. Surfing means we’re all the same.

It’s not entirely obvious what the surfer is after. In the beginning, surfing is difficult and deters many who take up the activity. The biggest challenge isn’t necessarily getting up on the board and controlling your body as it sails through the air. It’s knowing how the water moves.

Where the waves break, and where you need to be to catch them. How to interact with others in the water, how to show respect and evade oncoming surfers coasting down the line. It’s knowing where to sit, how to sit, how to paddle, how vigorously, and for how long.

To be one who surfs means you’re working through this process. It takes time to develop. You know when everything clicks. You feel a greater sense of rhythm in the water; you can control your body and the board as if they’ve joined forces. The board no longer is just an awkward trunk of a tree, but a ticket to freedom. The board becomes an extension of the spirit. Maybe that’s when one calls themself a surfer.

Surfing is just as much about the process, the preparation, and the energy that it evokes as it is about the activity. You wake up, and, before the day takes what it’s due, gather your things.

There’s often a hot beverage that accompanies the preparation, perhaps a steaming cup of coffee that infuses with the smell of surfing, which indeed has a unique, alluring smell: artificial wax, usually bubblegum or strawberry; a blend of fresh and stale air, because of the towel that has either been thrown in the back of the car with the rest of the gear and has never had the chance to dry fully, or, perhaps has just come from the dryer, which is rare and takes planning.

This is for you; the act of preparation is near to the heart. It makes one feel nostalgic, perhaps of summer days as a kid, surfing with parents or friends. Perhaps of a time not long ago, where the period of life was encapsulated by the act of surfing, as it acted as the central cog in which all else revolved.

When one sits in the front seat of the car and the whole cockpit is suffused with that unmistakable scent of surfing — life becomes simplified. In its simplicity, life becomes beautiful, manageable, worthwhile. Smells often evoke the strongest memories. You might see something and it reminds you of a time: kids playing on a jungle-gym, a falling leaf, a dog in the park.

You see a person who looks like somebody you once knew. Memories arise, with or without conscious effort, but they may just as easily blow away with a gust of wind. A scent becomes a part of you.

When we’re kids, we exist in the world of sights and smells and tastes; of feelings and action and vague memories. I almost think of my childhood as one thread of emotion, strung together by memories brought about by the senses.

A kid is part of the world, without thinking about what everything means. Kids explore boldly, and put their hands in dirt to see what’s beneath; they eat things to see how they taste. They exist as an indistinguishable part of the world, not separate from it.

To get older seems to mean finding, and once the well’s run dry, seeking, those things which once again instill you into being itself. Until then, we might see the world and don’t see ourselves in it. We watch, but don’t know how to interact with the sheer authenticity of being a kid, because we’re too caught up in our own heads to allow ourselves that luxury.

How then, might we re-establish the relationship with being itself; how do we find what makes life meaningful? A smell is overwhelming. It seeps into your being and you don’t have the choice not to look; the smell conjures up thoughts of a time, a feeling, when the same scent hung in the air.

Perhaps it’s that a smell is intangible. It can’t be seen, unless, perhaps from the steam rising from a pot of soup. A smell allows the imagination to run. And when it does, it clings to the past, what was once and what should have been.

Perhaps that’s what the surfer has found and hopes to re-create, day in and day out. When one gets in the car early in the morning and the engine turns on; as they fight the glorious glare of the morning sun, the clock, and the bed which beckons them to return, they’re creating what could be.

To start the day with a surf is to find meaning in the world.