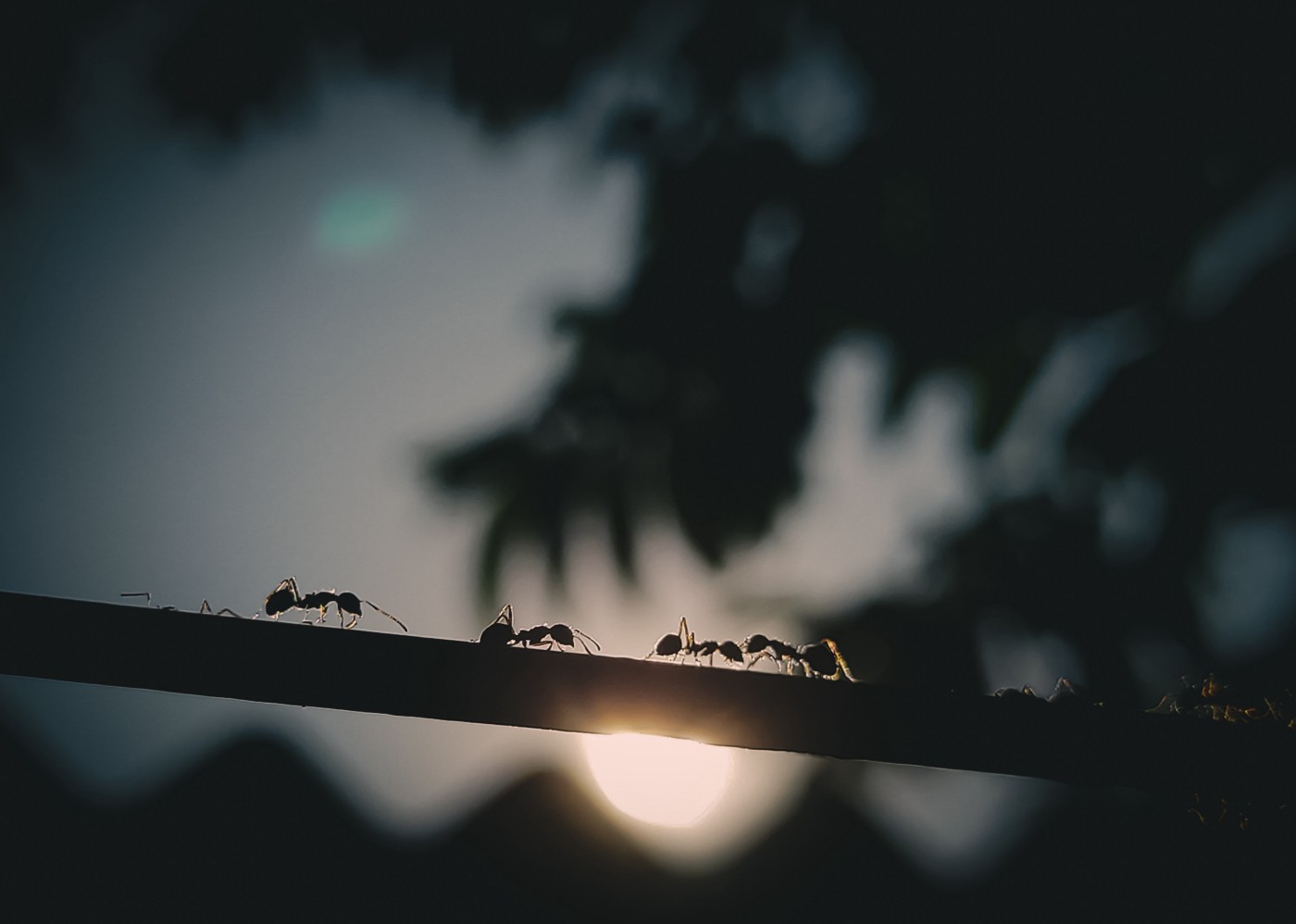 ANTS INVADED MY STUDIO yesterday. They hit me from all angles. I didn’t expect it when I woke up. I found them in the kitchen, and before I knew it I was deep cleaning the tiles, the counters, the stove, anything that may have served as a road beneath the feet of my tiny guests. But that didn’t stop them.

These little unexpected and unwanted creatures change our lives; but what do we really know about them? What do they know about us? Ants are travelers in constant motion. I don’t think I’ve ever seen an ant stop to take in the view. But I suppose I don’t really know them.

How do they decide where to go? I watched as they crossed the pad which catches water beneath the drying rack, like nomads journeying across the divided Red Sea. Who’s the leader that they follow? They began their march, following the ant equivalent of Moses. I tried to stop them like some omnipotent pharaoh from above, sending frogs from the sky in the form of cleaning detergent.

When ants infest your space they infiltrate the mind; it feels like they’re always on you, crawling, invisible, aboard the human ship to explore the galaxy that is my studio apartment. I’ll deal with you later…

I went to the beach to find some space.

I turned over on my towel to face the sun. No. An ant stared me in the face, for it had come along on a journey across galaxies, from one town to the other, one boundless frontier to the next. The ant had made it to the beach, and I could only marvel at its daring act of bravery.

I stood in the aisle, scanning the varying destroyers of ant worlds, choosing my Deathstar. My conscience hurt; I didn’t want to destroy them! But I felt I had no choice. I went with the one that looked least threatening.

Raid and cleaning supplies moved slowly on the conveyor belt. I wasn’t proud by any means. It was pretty obvious where my night was headed. A guy ambled up behind me; this is funny. I thought. Say something.

“How you doin?” I asked with a smile. I’m glad I spoke up, as I nearly listened to the voice in my head which always needs to have its input and says no, keep quiet. It was like he was waiting for me to ask. He smiled back and replied, laughing: “we’re flowin man.”

We started talking about San Diego, how he’d just moved here. About San Francisco, where he was from, and of course to complete the California trifecta, Los Angeles. The cashier got involved: “I just can’t do the traffic!”

They started going back and forth about not being able to stand LA. I stood patiently in amusement. And then, after a pause, I chimed in. “Ya, I’m from LA,” I muttered with a smirk.

At the end of the day, I was just buying some Raid. The ants brought me here — talking and laughing about cities, a conversation I’ve had dozens of times and never tire of. We chatted about going with the flow, and the joy of a Saturday night. Life simplified, for the ants had made me friends.

“Have a great night y’all.” I left with a smile, wondering what the ants were up to in the city that is my studio.