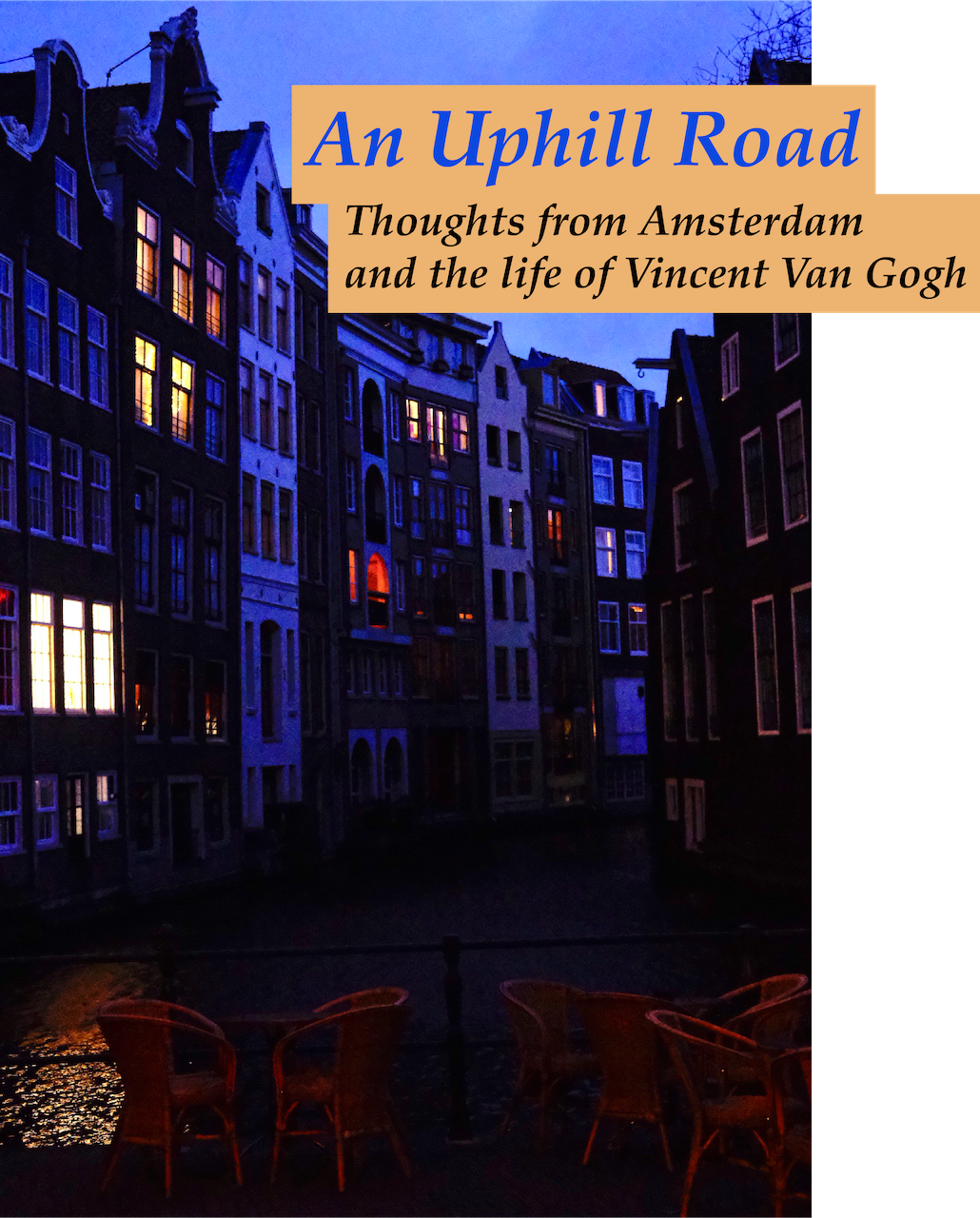 FROM THE NOORD, Amsterdam’s northern district, I stood alone on the dock and stared across the moving water at the lights of the vibrant city. I could see the Central Station in the city center, where trains come and go from all corners of Europe. Soft puffs of white smoke rose from industrial sites across the water like smoke from a pipe, rising into the sky and vanishing into the darkening rainy night. I boarded the ferry and made my way to the front of the boat.

Ferries run throughout the day from the Noord district, an eccentric area of Amsterdam where artists have turned a once monochromatic shipyard into a backdrop of creativity and design. On a dark February day, the colors of the shipping crates and the art on the warehouses and docks were a stark contrast against the ominous sky and unceasing rain. This, I believe, is in a way how the art was meant to be perceived. Not always on a sunny day, but when the world is grey, cold, in need of life. 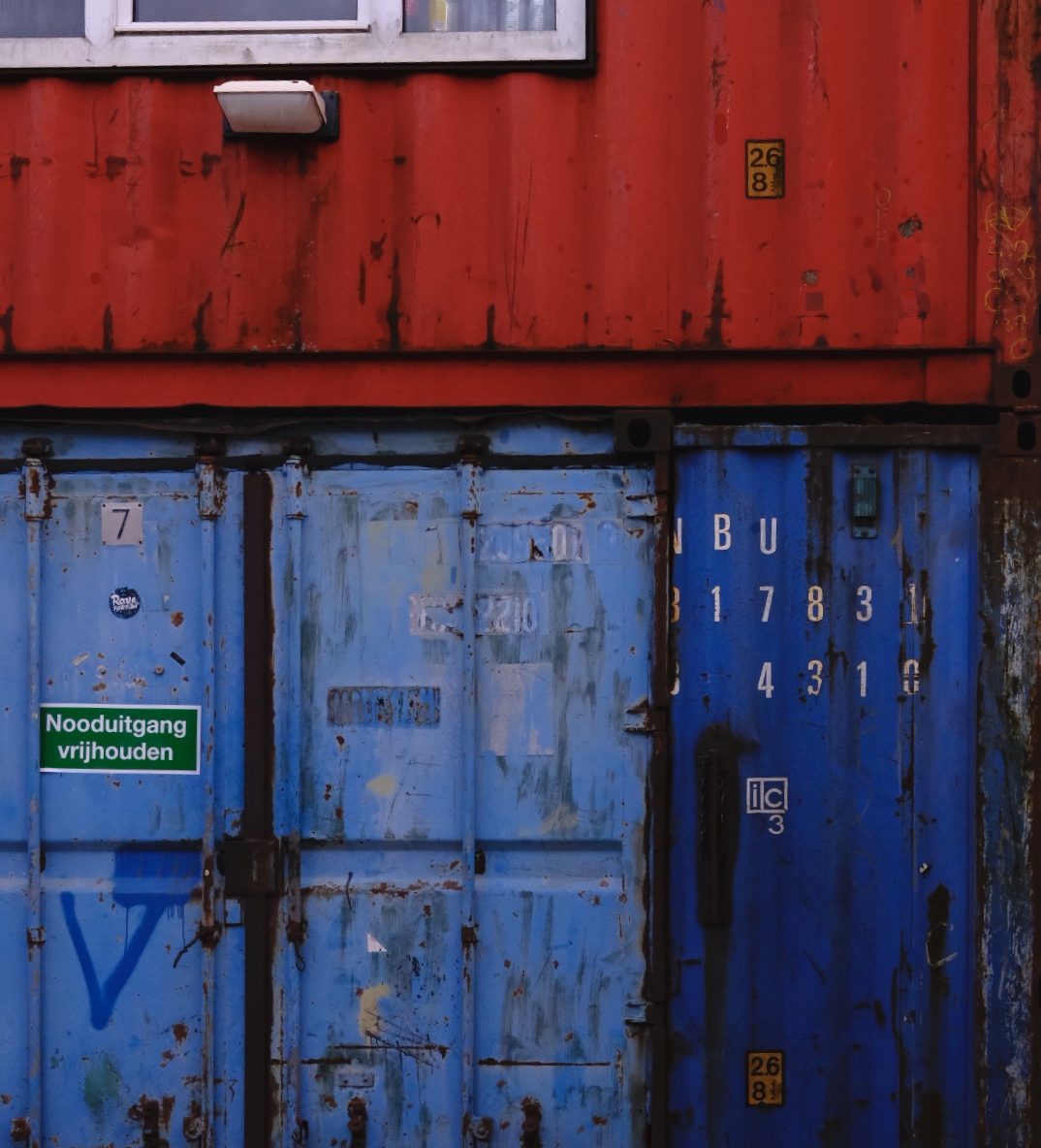 The ferry took off, swaying back and forth out of its launching dock until we were steadily cruising through the water. I stood at the front of the boat and observed the world around me. The final light of dusk faded away, the rainclouds turned into a deep blue.

The wind and cold rain against my face felt invigorating. We were crossing the IJ River Inlet, the waterway which separates Amsterdam Noord from the rest of the city. What gives Amsterdam its distinct character are the canals that the city is built upon. Amsterdam sprung up amongst marshland in the Middle Ages and remains below sea level, so instead of roads, there are bridges and houseboats, a different way of life that remains authentic.

Amsterdam feels modern amongst its history, it feels progressive, a place to create and learn, a city that leaves you inspired. I could imagine massive ships in the 1600’s, the Dutch golden age, returning to the capital of the world after months of navigating the ever expanding globe.

Day turned to night. The sky and water became one and blended into a purple color as we approached the city center, dotted by the orange light of the lamp posts which were muted by the rain. The colors were reminiscent of the work of Vincent Van Gogh, an artist whose name is synonymous with Amsterdam and a style of using rich, beautiful colors to capture the natural world.

Van Gogh, being Dutch himself and spending time in Amsterdam, is remembered by the museum in the city which bears his name. The Van Gogh Museum holds the largest collection of his paintings and drawings in the world. Amongst other artists, Van Gogh’s style immediately distinguishes him. Paintings such as The Starry Night make Van Gogh unlike any other artist, where his work makes you want to live in the world which he painted.

As a viewer, it appears Van Gogh saw life through a brilliant lens. But like all of us, he wasn’t a perfect human being, nor was he as successful during his career as we consider him today. He was tormented, and in the end took his own life with a bullet through his chest.

He arrived in Amsterdam in 1877 at the age of twenty four to prepare to study Theology at the city’s University. Van Gogh wrote of the joy he found exploring Amsterdam’s canals, visiting its museums, and simply watching the world pass by. He spent his days inspired by the lively docks, where his uncle served as the director. 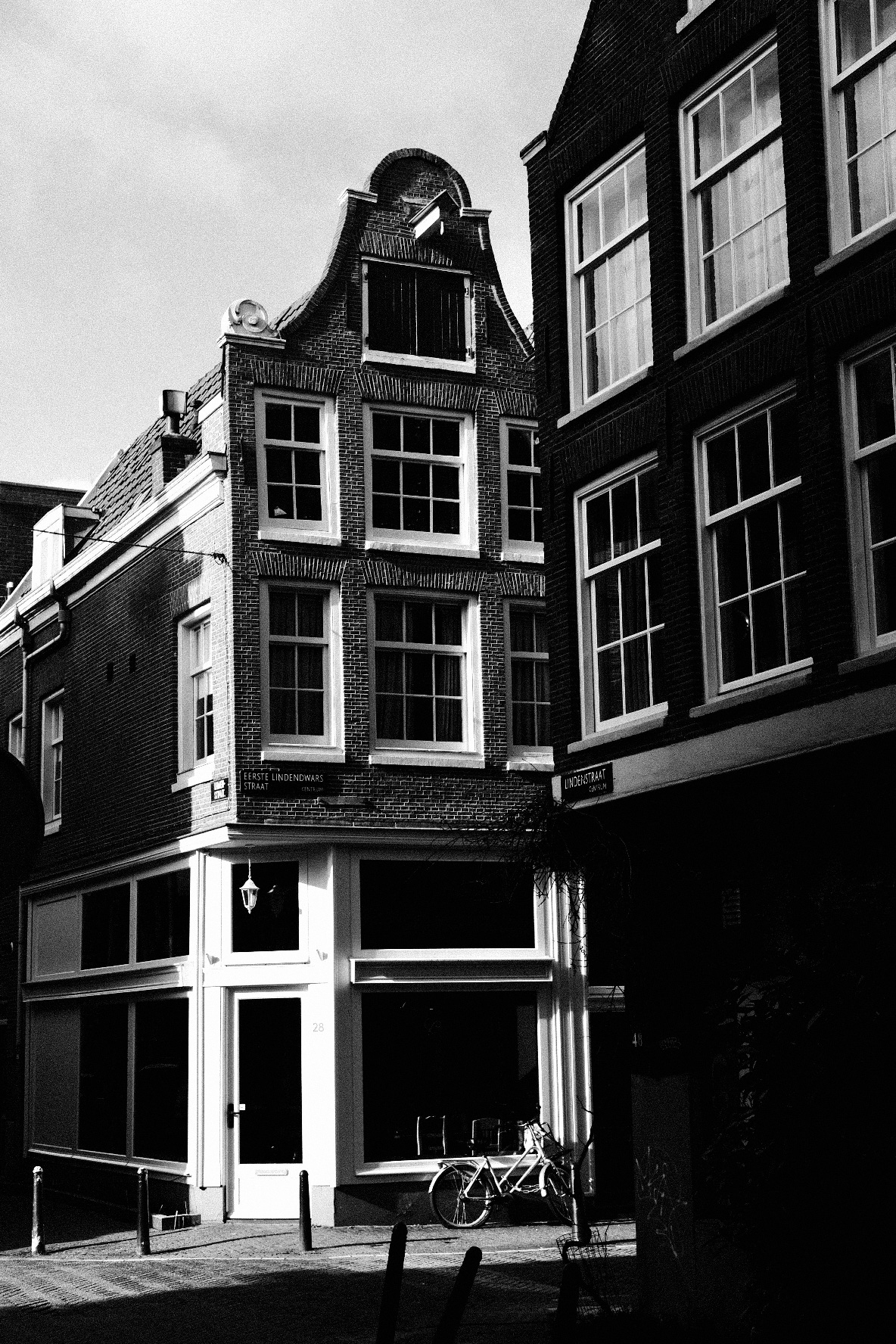 Almost a hundred and fifty years later, in a time where our world has undergone unimaginable transformations, it amazes me how these ancient cities still retain their character, their beauty. As I walked the medieval cobblestone streets, the rain would come and go as it does across all of Europe. The skies would open and the rain would pound down for a moment, causing me to run and seek shelter wherever I could find.

The next moment the rain would stop, the clouds would open up, and the city would undergo a welcomed change. The city became a jungle of light and dark shadows, the flowers along the canals were alive and vibrant, the streets slick and shimmering. This creates an unmistakable mood that gives one life, as If the world had been reborn after a fresh rain, the cold winter day revitalizing.

During Van Gogh’s time in Amsterdam and throughout his life, he would write letters to his younger brother Theo, an art dealer in Paris who supported Vincent emotionally and financially. Vincent confided in him in hundreds of letters, he loved his brother more than anyone. At the Van Gogh Museum, some of the letters are on display and depict Van Gogh’s unique vision, his passion for art and life, and the connections he found in the world between different mediums such as painting and philosophy.

One letter I came across was truly inspiring and gives a glimpse into the misunderstood life of Van Gogh. He writes to Theo as a student from Amsterdam, “The winter mornings have something special about them.”

He relates the scene to a painting of the artist Edouard Frère. He often compared life to other artists of the time, almost as a way to believe someone has been through what he has. He used that as inspiration to create, to continue to learn about the world. If they could get through whatever it was he was experiencing, so could he.

Life was difficult for him, where everyday felt like a battle. We all feel this way, because life is a battle, but what is it about our world that makes life worth fighting for?

Those days of struggle and sacrifice, if we’re lucky, eventually pay off and on the other side of the darkness we see a glimmer of light. Sometimes however, things just don’t seem to make any sense. If we don’t continue to fight, life loses meaning, as we can’t truly appreciate the good, the true beauty of it all, the light breaking through the clouds after a sudden rain, without feeling what it’s like on the other side. That struggle and passion makes us human and gives life its sense of wonder. It isn’t the end goal, but the everyday longing to continue and take another step to find that light that makes it all worthwhile. 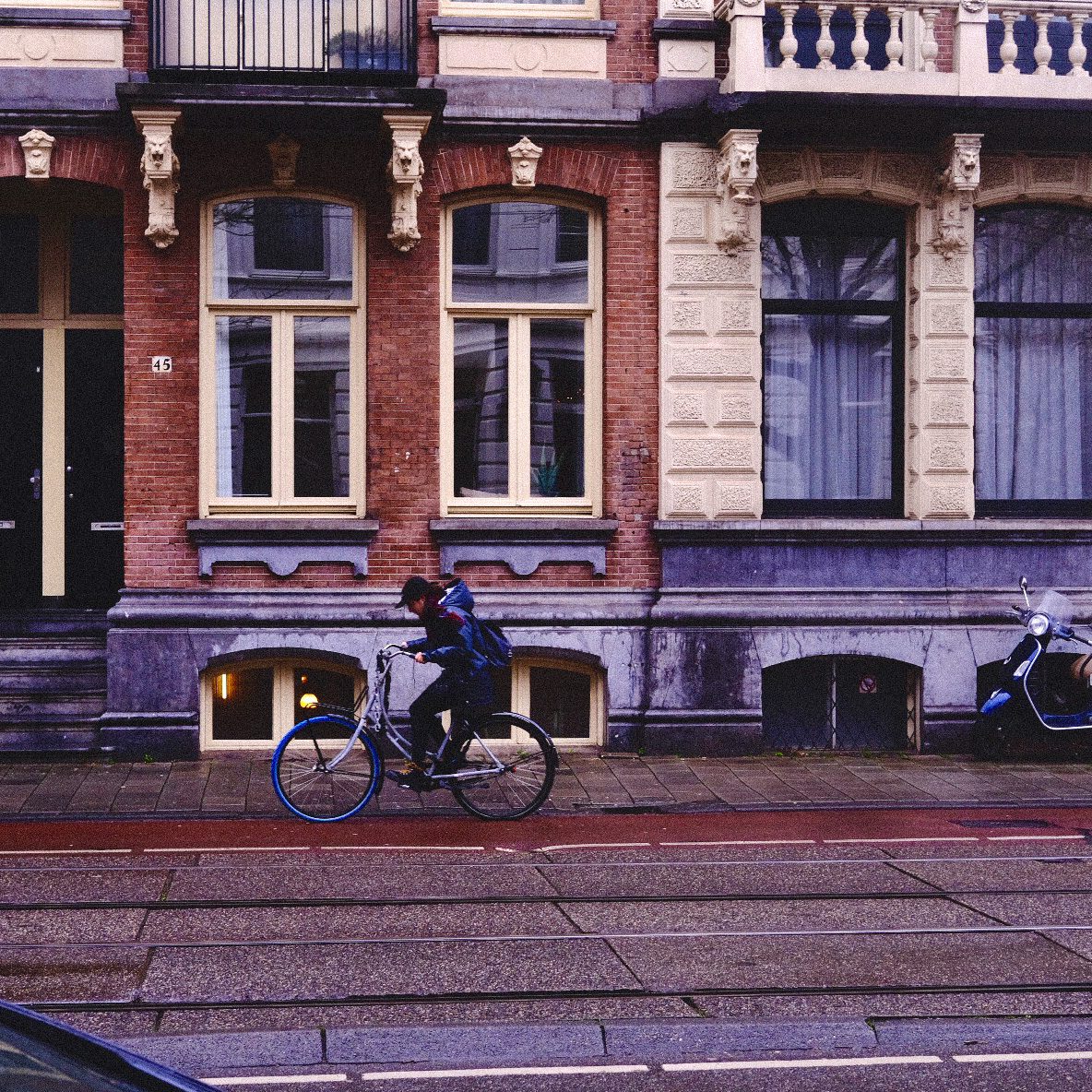 Van Gogh wrote Theo, “Truly life is a fight, and one must defend oneself and resist and make plans and calculations with a cheerful and alert mind in order to make it through. It becomes no easier the further one gets in life, and it has been rightly said,

‘Does the road go uphill all the way?

Yes, to the very end.

And will the journey take all day long?

From morn till night my friend.’”

He continues, “By fighting the difficulties in which one finds oneself an inner strength develops from within our heart, which improves in life’s fight. One matures in the storm.”

There is no end goal to our collective journey. We share the day to day trifles, the common struggle which makes us warriors in pursuit of some sort of satisfaction. When we arrive at what we believe is the end, that we’ve somehow made it, the finish line isn’t ever quite what we imagined it to be. Our reality is the dream, the journey itself is what brings joy.

After some time in Paris, Van Gogh traveled to Arles, where his style became fully realized. He left Paris for the French countryside seeking some sort of refuge from illness, smoking and drinking. The light of the glowing fields of wheat, the olive trees and massive sunflowers brought him tremendous inspiration. His paintings became vibrant and whimsical, as if childlike in their creation with no limits or guides for what should or could be done.

While this could have brought fulfillment to an artist like Van Gogh, who spent days in the tranquil country working at his craft, his quarrels with other artists and his ultimate suicide shed light on his depression and perception of self failure. 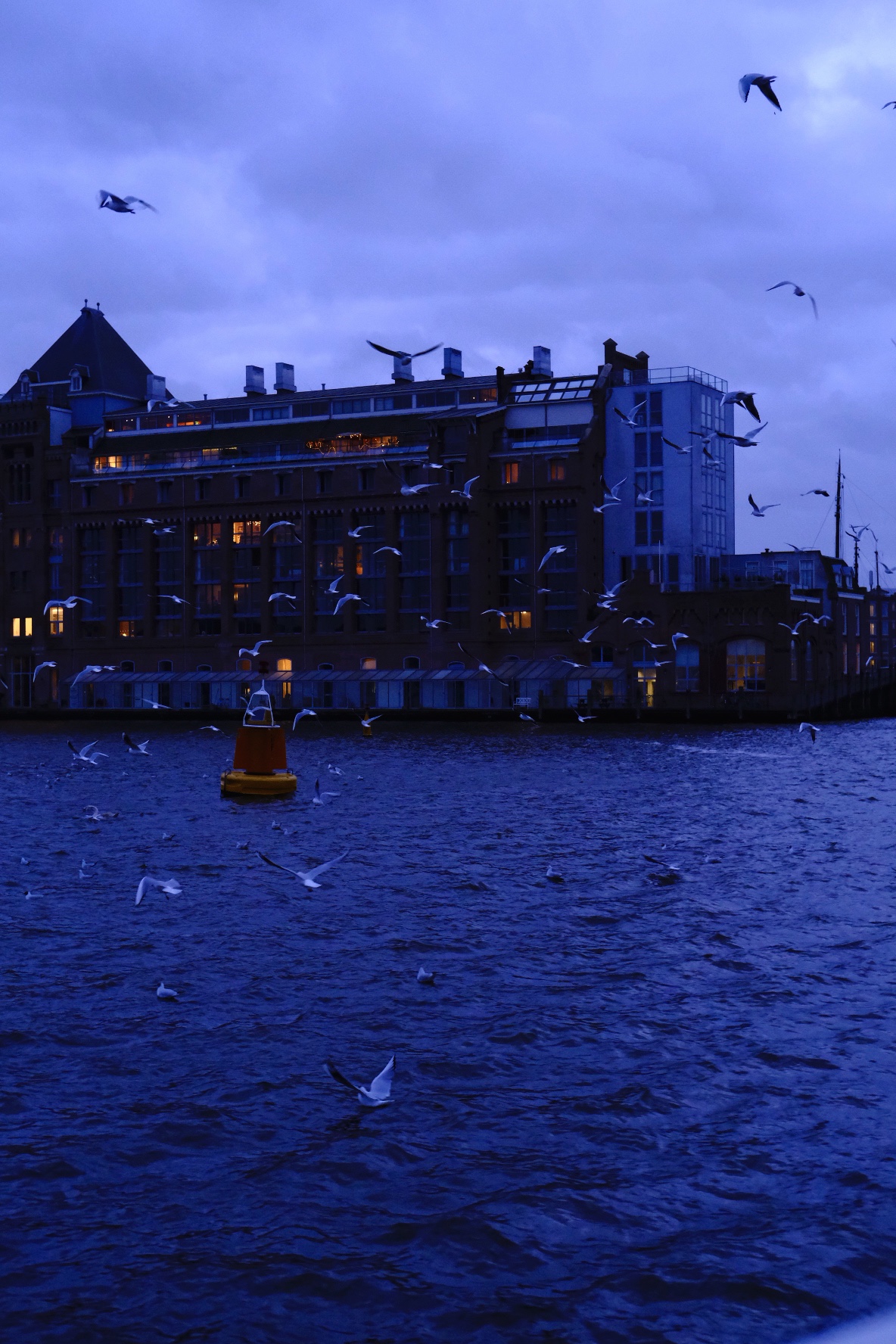 What was he after? Was it fulfillment, where he himself knew he was at his very best? Was it a connection to God that he couldn’t quite achieve? As people, we want to feel worthwhile to society. We crave success, especially in the eyes of others. But what will always be there no matter what anyone else says or thinks is the pursuit of inner peace.

Often, we think that will come from a result of reaching a goal or destination, where finally our lives will change.

Peace doesn’t come from making it, as there are tons of people who are successful, yet tormented on the inside. Peace is attainable every day at any moment, whether we’re on a trip with nothing to do but become mesmerized by water gently crashing against the sides of the boat which we stand upon, or whether we’re in the heat of an inner battle, unsure where our lives will lead, wondering why the world works the way it does. It doesn’t matter what’s happening on the exterior, as long as the fire burns within us to live, to fight, to fully appreciate wherever we are in life, then peace is always there to take.

Van Gogh was undoubtedly a brilliant artist. But if that pursuit of perfection brought him pain and suffering in the end, then what did it really mean. I enjoy this simple note from his letter, a reminder of his human side and a longing for simplicity.

“I cling to the church and to the bookshops, if I can think of an errand to do there, I do it,” he wrote to Theo. “Today I was at Schalekamp’s in Hartestraat and bought a couple of maps from the Teacher’s Society. So often in the past as well, a visit to a bookshop has cheered me up, and reminded me that there are good things in the world.”

Life is simple when we make it so. From morn until night, peace is ours to take. 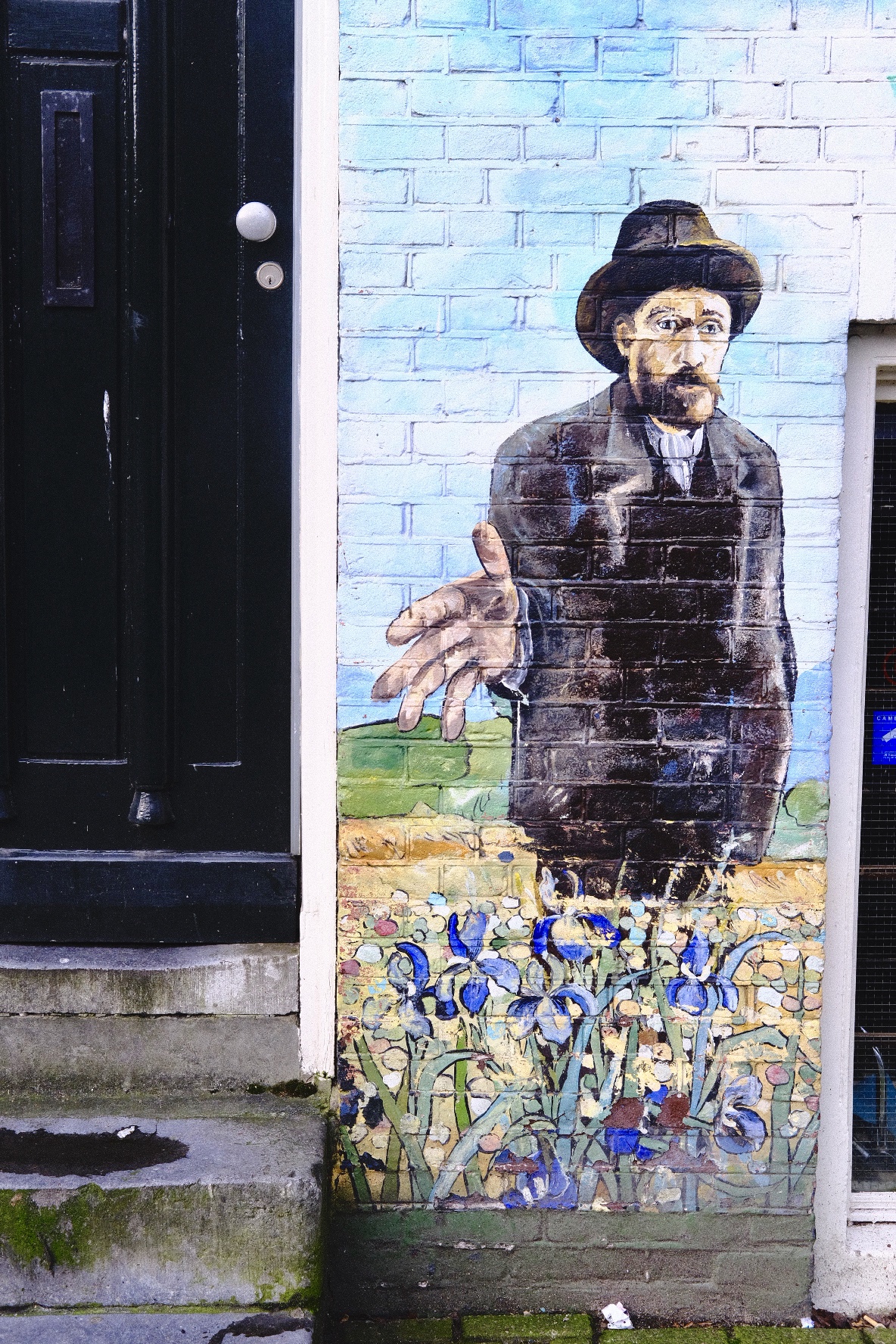