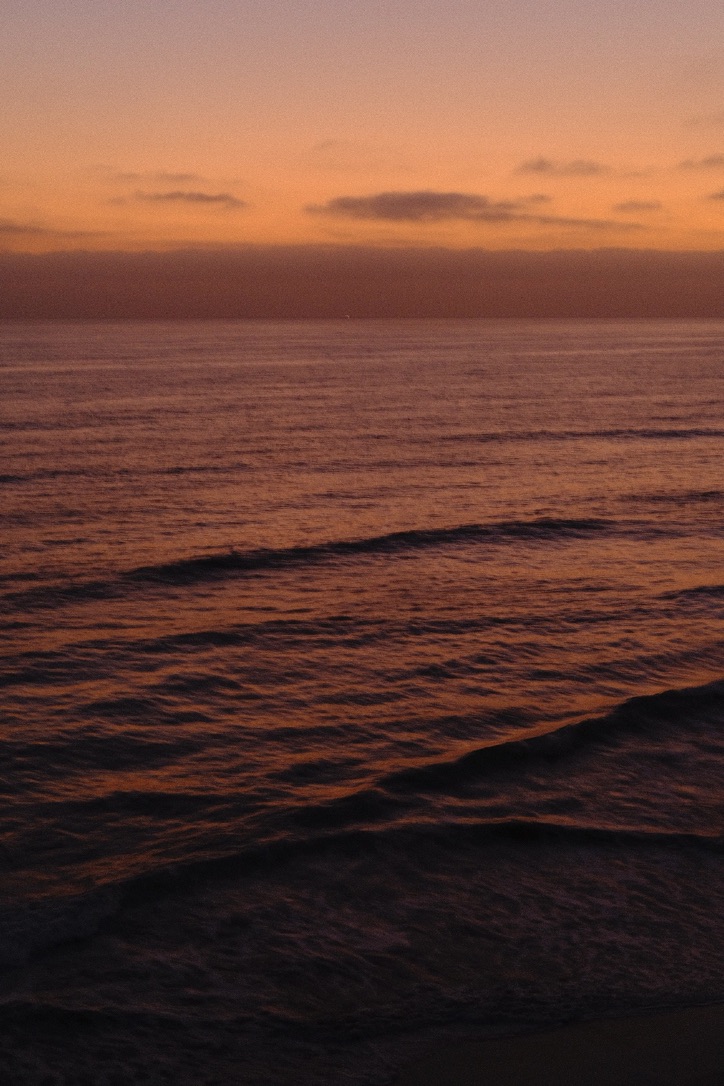 THE RADIANT MOON hides in a pocket of summer clouds, rolling and pale pink in the hazy light of dusk. It had been a long day; life tested my patience and my strength of mind and body.

I left for a walk at that glorious hour when the night and day converge; inspired by the depths of darkness and brilliance of day, our inner being finds a moment to speak, to revere, to contemplate without restraint.

Life becomes fuzzy amid the dance of burning sky and fading light; the lines of reality blur, and the night envelopes us in love.

I couldn’t believe my eyes.

I stepped from the street onto the dirt road beside the train tracks, then crossed the metal tracks to reach the cliff beyond.

A few others walked by and we shared a moment of connection through a smile and a second or two of interlocked eyes, a fissure in the bedrock of our reticence.

Connecting draws us from our self like water from a well. Regardless of what we’re going through, when we seek connection to others and the Earth, we’re placed within the symphony of cosmic order.

We might produce a lovely tune as a solitary life; but when we become a unique sound in a greater whole, we create music.

We’re here for a joyful sojourn on planet Earth.

Much of life we can’t explain. Let’s not act as if we can. There’s meaning in that; answers in the incomprehensible. For if we’re here, given another day to try and fail, to connect and inspire, to fall and learn, lets see it all of life as a joyful sojourn.

Look down. Notice how the ants create order, how flowers bloom in unlikely places, how life will fight to live, no matter how insignificant.

Life will test us, but we’ve been equipped with laughter.

We’ve been gifted consciousness, capabilities we don’t yet even know of, and boundless capacity for love. Let’s not take that for granted — not a day, not a breath, not a second.

A man stood on the cliff in awe of the moment. Let him be alone, I thought. Okay, that’s what I would normally think — let’s do the opposite.

“This is incredible,” I called out noncommittally, slightly raising my voice so that he’d hear. He didn’t turn.

“This is incredible!” I called out again over the sound of crashing waves below. He looked around, and then back at me, shaking his head in disbelief.

“It’s unbelievable,” he said, with genuine astonishment in his wide eyes.

“I was just sending a picture to my son.”

We began to talk; I could feel his warmth, and how much he missed his only kid. He told me a few details of his life — that he’s from Pittsburgh, lived in Chicago, and now resides in San Diego. He’s the youngest of five; his older brother hadn’t been the same since Vietnam.

“I like to take the train up north to see my son, but not too often, you know.” I wanted to talk, to share my opinion, but sometimes it’s best to say nothing.

After a pause: “I need to start taking the train; I always think about it but never do.”

I told him a bit about myself, then departed to continue walking beside the tracks. After a while, I heard the low rumble of the coming train.

The train passed by in the fleeting light, its autumnal colors of dark amber red and yellow and black reminding me of my recent travels to the Pacific Northwest.

And then night and silence fell, and I looked up at the moon which no longer lay hidden in a veil of clouds, but shinning remarkably bright and full.