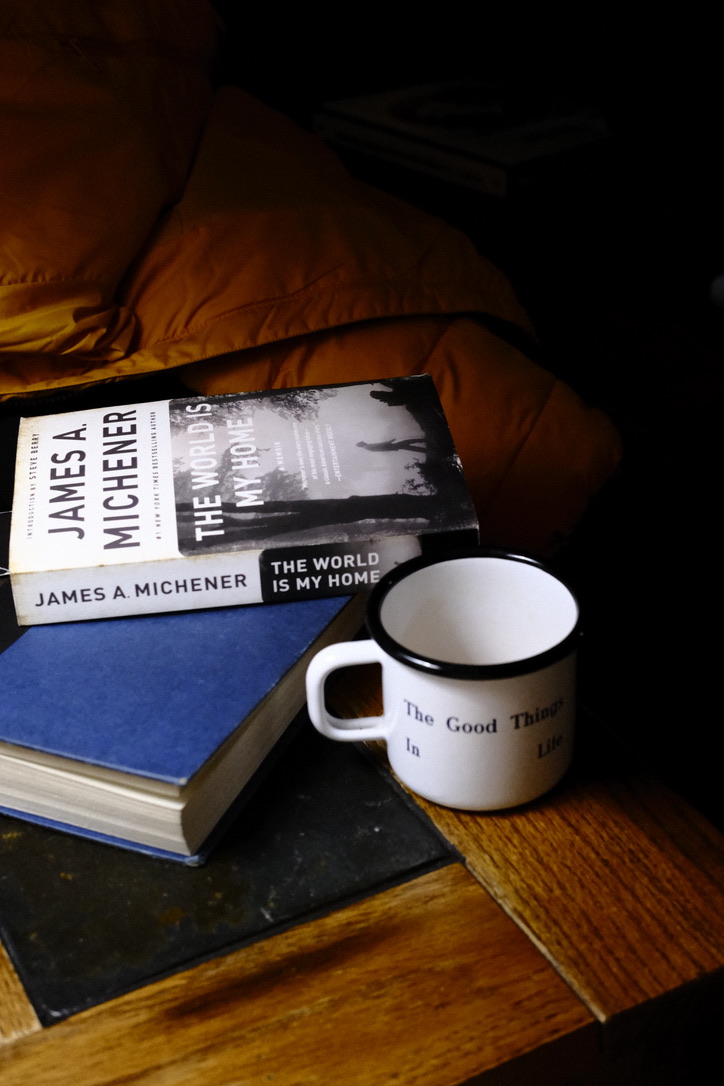 WHETHER FICTION OR NONFICTION, FANTASY OR BIOGRAPHY, every book says something about our human experience. The words on the page flowed from the pen of a human being like you and me.

A book is a window into another soul, an adventure into another time, another place, another reality. As I finished every book on this list, I came away with at least one profound insight about our modern world.

These books were full of valuable lessons and excellent stories. They made me think deeply about who I am and what I want out of life.

They provided comfort at low points and solace through it all. Many provided a bridge to reconnect me with my inner kid who curiously pondered what makes the world turn.

No matter what life throws our way, reading is a beautiful reminder that the world is full of magic. Not even a global pandemic can change that. It only takes opening the cover of our favorite book to feel it.

Here are 21 of my favorite books from this past year that profoundly inspired me. I hope you’ll consider reading any one of them as we turn a page of history and head into 2021.

Shoe Dog is an inspiring memoir by the founder of Nike, Phil Knight. Nike is known as one of the most prominent global brands. I devoured this book and found Knight’s stories totally captivating, from Nike’s conception to where it fits in our modern-day.

The World of Yesterday, by Stefan Zweig

The World of Yesterday is one of my favorite books by 20th-century author Stefan Zweig. If you’re interested in pre-WWI Europe and how our modern states came to be, then this is a fascinating story.

The Biography of Leonardo da Vinci, by Walter Isaacson

I’ve read this one multiple times, as it’s always a refreshing source of inspiration. Leonardo da Vinci was just a man. Yet he was insatiably curious about how the world works.

His life inspires me to be curious about everything from how a river eddy works to the construction of muscles in the human body. His inquisitive attitude towards the world is evident in his most famous art, such as the Mona Lisa and The Last Supper.

Franklin valued pragmatism above all else. He is one of the most intriguing characters in history; a writer, inventor, scientist, and diplomat. Like Leonardo da Vinci, he too was insatiably interested in others and how the world works.

Perhaps unlike many of America’s Founding Fathers, Benjamin Franklin seems like a guy you could share an ale with at the local watering hole. No matter who you were, he’d be interested in your story.

The Wise Men: Six Friends and the World They Made, by Walter Isaacson

For some more modern history, this book tells the tale of six friends who from behind the scenes made the decisions that practically shaped the 20th-century and the outcome of the Cold War.

A peaceful read that made me strongly consider what’s essential in my life. Nature is at the top of that list, and this book played a significant role in its becoming so vital.

I’d be lying if I said this book didn’t inspire my recent road trip through the Pacific Northwest. I have a newfound respect for McConaughey after reading his story. It’s a fun one that’s creatively told.

The World is My Home, by James Michener

I recently finished this book, and it honestly changed how I see the writing profession and life in general. Michener was an incredibly unique and prolific writer of the 20th-century who wrote many books based on a location, such as Hawaii, South Africa, Alaska, Spain, and Israel.

He weaves a tale of that place through many chapters, tellings its history from thousands of years ago up until the modern-day. It blew me away to learn about his young adult life in the Navy and how he became so enthralled with traveling the globe.

As a bonus, I recommend The Source, his epic book based on Israel.

Bird by Bird, by Anne Lamott

If you’re a writer you’ve probably heard of Bird by Bird, or you’ve read it yourself. It’s a wonderfully funny book that explores the writing craft. Yet I believe it pertains to anybody interested in unlocking the stories we all possess within us.

To Show and To Tell, by Phillip Lopate

This book made writing a personal essay seem incredibly enjoyable. No, not the type of essay we learn how to write in school that almost always kills our joy for writing, but the kind that explores an idea. He calls it “thinking on the page,” and I’ve found this style of writing to be liberating.

Lopate’s book is very relatable. His advice goes against the typical “show, don’t tell,” which is refreshing and encouraging.

Zen in the Art of Writing, by Ray Bradbury

Zen in the Art of Writing was one of my top three books of the year. I didn’t know much about Ray Bradbury before reading this book. I actually bought it thinking the author was Kurt Vonnegut (classic mixup).

I think this had something to do with mixing up Farenheit 451 and Slaughterhouse-Five (I think it was the five). Anyway, I’m so glad I did.

This book inspired me to continue on my path as a writer. Bradbury lived with zest in his soul and an aptitude to create from a place of love. When reading this book I found it impossible to be in a bad mood.

Bradbury’s energy is magnetic and he makes writing simple. Do it because you love it.

This book focuses on the art of careful and thoughtful reading. As a writer, this is an invaluable skill.

Prose made me realize that every word is there for a reason. Sometimes it’s our job and an adventure on its own to figure out what that is.

This is a philosophical story of Siddhartha, the Buddha of ancient India. There are some tremendously insightful philosophical lessons in this book. It’s a relatively short and easy read.

War and Peace, by Leo Tolstoy

War and Peace is a classic of Russian literature told by one of the greatest storytellers of all time, Leo Tolstoy. The Napoleonic Wars are riveting, and the scene between Napoleon and Prince Andrei on the battlefield is one of my favorite episodes in all of literature. I wrote about the scene in this story.

East of Eden, by John Steinbeck

This is the first book I’ve read by Steinbeck, and it immediately became one of my favorite books. Steinbeck portrays the harsh living conditions of California in the early 1900s.

The story speaks to who we are as human beings and the constant tensions we face between good and evil, right and wrong, hiding in the dark or seeking the light. I wrote about the book and driving through where it takes place in this story.

The Blue Zones, by Dan Buettner

Author Dan Buettner travels to the Blue Zones of the world, such as Ikaria Greece and Okinawa Japan, to learn about the secrets of the centenarians, the world’s oldest living people.

Being healthy isn’t as difficult as we sometimes make it. Health means much more than just how we look or the number on the scale.

The Subtle Art of Not Giving a F*ck, by Mark Manson

This one’s a short, amusing, and inspiring self-help book. There’s only so much we can give a f*ck about. We must focus on what truly matters.

I loved this book. Every one of us is an artist, and Godin dissects how we all have something powerful to give to the world.

The Overstory, by Richard Powers

The Overstory is incredibly interesting. It made me think about trees in an entirely new light. I now see this as living breathing beings of the earth that communicate with one another just as we do, and deserve to be honored.

I genuinely appreciated this story of a young man trying to find his way in early 20th-century Japan. Japan is like nowhere else in the world, and Mishima, one of Japan’s most revered writers, captures that beauty through the written word.

This was one of my favorite books as a kid, yet I enjoyed it even more now as an adult. If you aren’t into fantasy, my purpose of adding Eragon to the list is to implore you to read a book you loved when you were young.

I’ll attest that the magic hasn’t faded; we could all use some magic in our lives right now.

If we take just one thing away from reading a book — the rekindling of a memory, a new interesting fact, or just some peace of mind —  then I believe opening that cover was worthwhile.

Each of these books provided me with these takeaways and so much more. I hope you pick up one, two, or ten to inspire you in the coming year. I’d love to hear if you read them and what effect they have on you!

Here’s to a fresh start and some quality time this year with a wonderful book. Who knows, one of these may become one of your favorite books, too.