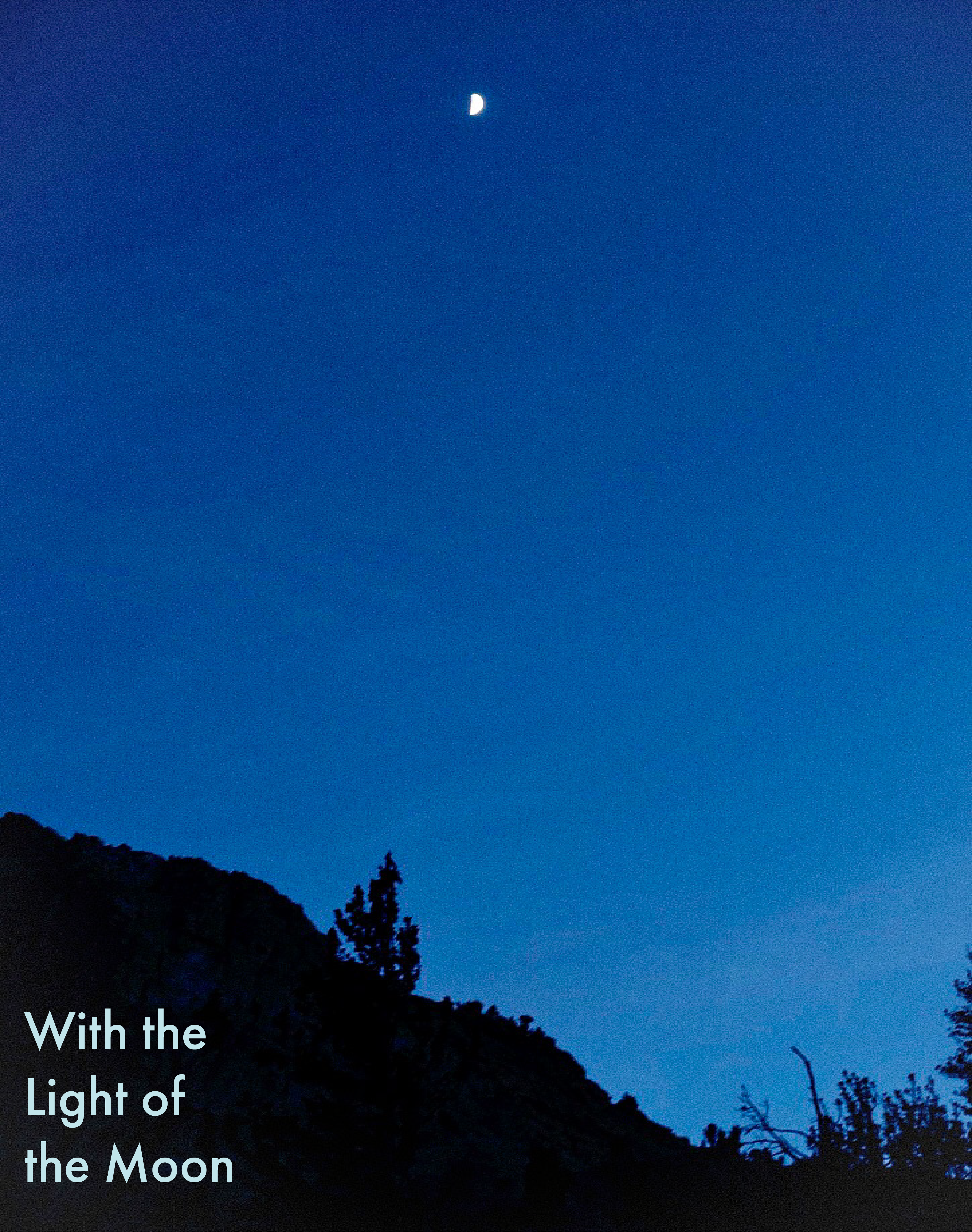 06 Oct With the Light of the Moon

DAWN BRINGS WITH IT AN INFLUX OF THOUGHTS of how the next few hours may go. On an ordinary day, my inner voice is my motivator to do what must be done. That is to write, to move, to appreciate where I am in life.

On the side of the bed, I sit in silence and allow my thoughts to gather.

That was a weird dream. Why must I always be running? It’s exhausting. Through fields, from someone, this lucid state bereft of reason where my legs don’t seem to move as quickly as I’d like.

I stretch my arms to the ceiling, bend over from side to side like a steel pendulum, and take a few deep breaths. I’m alive.

Although the moon still shines and the room is dark, it’s a new day. A sliver of white light has snuck under the bottom of the drapes, a semblance of what’s out there.

I chug a few glasses of water and sit down to put on my shoes, one by one. I hope it’s cold outside.

As I take my first few steps into the street and look up into the sky, I feel at peace, knowing I’m where I’m supposed to be.

It’s at this early hour when I find the energy to face life’s everlasting questions. The morning darkness remains a beautiful mystery; I realize I don’t need to find the answers, and perhaps never will.

That doesn’t mean we shouldn’t question, for we mustn’t be afraid of not knowing.

I find inspiration from the stars which depart with the permeation of light. It’s as if under the cloak of the night I don’t yet have to think about the quotidian, but only the universal — why we’re here, really here.

The darkness begins to fade and I stop to take in the subtleties of our planet; the drops of water lingering atop green blades of grass, the aroma of the flowers which line the homes I pass. Everything seems better when covered with a fresh layer of dew.

This phenomenon, the going of the moon and the coming of the sun, we mustn’t let it become routine. It’s part of the wonder of living, a simple moment to experience no matter where we are in the world.

After a few songs to get me going, I’ll listen to a lecture on philosophy or an audiobook, something to get my mind thinking critically.

A lesson on the Newtonian Revolution of the late 17th-century fascinates me, when Isaac Newton discovered the laws of nature that act as an orchestrator, directing the notes of our universe.

People could hardly follow the mind of Isaac Newton, but he inspired them as he does me, someone never took a physics class and hardly excelled in math.

Through his laws of motion and gravity, the English physicist convinced the readers of his Principia that we don’t live in two worlds, separated by what we can’t fathom.

We live in one coherent realm, where everything has a purpose. Furthermore, the human mind can comprehend this order that far precedes human existence and religion, dinosaurs and ancient beasts, even our planet’s creation.

Alexander Pope wrote of Newton: “Nature and nature’s laws lay hid in night. God said, ‘Let Newton be,’ and all was light.”

Newton realized, when an apple fell on his head, that a specific force controls all that exists. Yet, he couldn’t explain why or how. I do not know why, I do not know how, I only know that it is, said Newton.

With that comes perhaps his most impressive proposal of all, the fact that he did not know. Newton admitted ignorance, and proved he too was human.

The morning moon rests as a beacon in the sky, a reminder that these lessons and abstractions are more than just ideas.

When I observe the light of the moon, I feel a connection with an energy greater than any single person, a bridge between all of human history. We’re no different today than those who wandered and questioned, who struggled and loved with all of their hearts.

What’s out of my control is taken from my hands, like the laws which govern the heavenly bodies. The universe has a plan.

Walking helps me simplify the challenges I face and confront the ones before us collectively, known and unknown. Whether we choose to share and find comfort or keep these concerns to ourselves, we all face something.

I get up and go because I must, because I know I’ll feel better having gone into the world to notice the details; with each step, my mind unravels like a ball of twine to be used to construct other thoughts and ideas.

I keep taking steps because it’s part of what makes us human; the need to move and progress. Through movement, there’s nothing that can hold us back. Through our experiences, we derive meaning.

Often, we don’t see the results of our efforts. It feels as if meaning has been lost.

We keep pressing on to reach an end and find an answer to our questions. Yet, the solutions, the recognition, the change, they don’t come. That doesn’t mean we should ever stop taking steps forward.

In the pursuit of happiness and questioning who we are, there will often be no clear answer other than an indescribable feeling in our heart and soul which tells us, keep going.

So that’s what we must do.

With the light of the moon leading the way, I know I’m not alone.

This story was originally published on Medium.com in my publication, Dare to Dream.